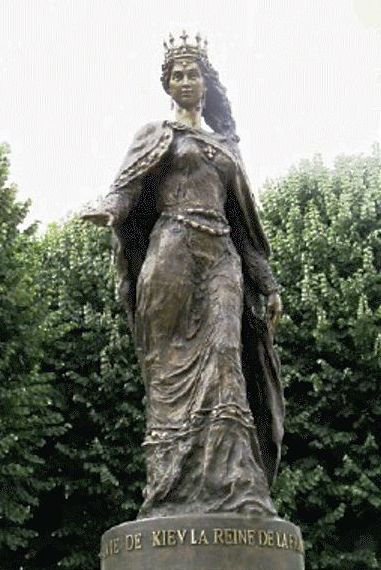 King Volodymir had many religions to choose from, but he chose the religion of the strongest country in the region. It also made it possible for him to marry into the imperial house of that country which benefited his dynasty and his own country. His taking Basil as his the christian name indicates that in Byzantium he found an example to follow in political and cultural aspect.

Later historians would compare Volodymir’s baptizm to Emperor Constantine’s establishing Christianity as the official religion of the Roman Empire.

With his father Volodymir marrying into the Byzantium imperial family, two countries became the allies and Kyiv started the process of copying all the best there was in Byzantium.

King Yaroslav was good at learning (the contemporaries wrote that he was reading “day and night”) and building and he built many things in Kyiv emulating Constantinople.

For example, the Golden Gate which stands right at the entrance of current Kyiv metro station with the same name, resembles very much the same of Constantinople.

Here is how the Golden Gate looks nowadays with the monument to Yaroslav right on its side.

But the most amazing of King Yaroslav’s construction project was St. Sophia Cathedral which was built around 1037 and is situated right behind the Golden Gate. The scholars agree that the name, and some elements of the design were borrowed from the Haiga Sophia in Constantinople.

Kyivan Cave Monastery was modeled on Byzantium monasteries as well.

– Yaroslav himself married a daughter of Swedish King Olaf Ericsson.

In the royal Viking city of Sigtuna which was the childhood home of the Swedish princess Ingegerd Olofsdotter, the future wife of Yaroslav the Wise, recently a lot of Kyiv Rus necklaces and ceramics have been uncovered by the way.

“The court of Volodymyr the Great in Kyiv hosted legendary Norwegian king Olav Trygvasson who spent many years in Kyiv during his exile.

The future King of Norway Magnus the Good (1035 – 1047) also spent some years in Kyiv for military training education.

However, the most legendary in the history of relations between Kyiv and Oslo was marriage of Harald Hardraade and daughter of Yaroslav the Wise Elizabeth (Scandinavian name – Ellisiv). Harald spent a long time at the court of Prince Yaroslav, together with Magnus, who was Harald’s nephew. Norwegian sagas say that after Yaroslav the Wise refused Harald to marry away Elizabeth, he left for Constantinople and returned with glory and treasures. They married in 1045, and next year Harald left for Norway with his wife Elizabeth.

After Magnus’ death in 1047 King Harald Hardrade became the King of Norway and the same year founded a new capital of Norway – Oslo, turning the city into the new royal residence. Harald died in 1066 at the Battle of Britain. It is also known that Elisabeth was waiting for his triumphant return at the Orkney Islands.” (Ukrainian Embassy page)

– Yaroslav’s another daughter became the famous Queen of France.

Unlike her husband, the King of France, Anne could read and write, and in her letters to her father she described Paris as a gloomy place which could not be even closely compared to Kyiv.

The unique Reims Gospel all the French Kings swore allegiance on was brought to Paris from Kyiv and first several pages in Cyrillic are believed to be hand written by Ann herself.