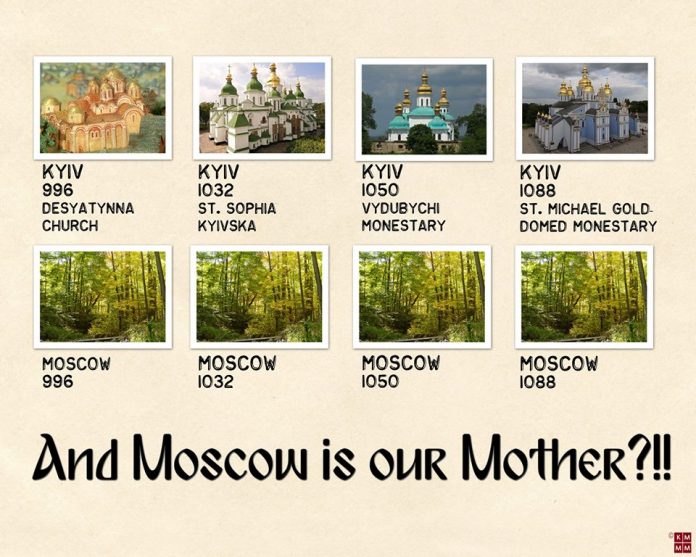 – 1043 Yaroslav sends his flotilla from Kiev to demand money from Byzantium.

Constantinople refuses, tries to withstand, but gets its flotilla defeated. The seizure of the city is prevented only by the huge storm.

It is not quite clear why Yaroslav the Wise decided to return to the Vikings way of his ancestors in dealing with Byzantium, but it clearly shows what might military and politically Kiev had by the time. If there is theoretically any other city which has the right to claim to be called ‘The Third Rome”, it is Kiev of that time.

And King Yaroslav the Wise was the most influential ruler of Europe.

“In the medieval world, the ruler of Rus’ bore a title in Old East Slavic (kniaz’) that shared roots with konungr, cyning, and even king. Moreover, when we look at the titles given those Rusian (people from Rus’) rulers, they are typically titles such as konungr in Old Norse and rex in Latin.

and he opted to include the Rusian ruler not among the princes or dukes (two common modern titles for Rusian rulers) but among the kings. In so doing, Pope Gregory VII acknowledged Rus’ as one of the kingdoms of medieval Europe.”

(The Kingdom of Rus)

It is very important that the author of the book described above writes “Rus” and “Rusian” with a single “S’.

Why? Because current “Russia” has nothing to do with the Rus!

Or, better say, current Russia has the same rights on Kiev Rus’ legacy, as, for example, the current country of Romania has on the legacy of the Roman Empire.

– But what about Novgorod? – the usual question is. – Isn’t it where Oleg came to Kiev from, and where both Volodymir and Yaroslav ruled?

Well, Oleg, whose real Viking name was Helgi had come to Novgorod from Scandinavia in the first place, so Novgorod was just a transitory place on his way to Kiev. Where two other Viking chieftains, Askold and Dir already ruled. With Askold being even some relative to Oleg.

Both Volodymir  and Yaroslav did rule Novgorod as princes before becoming kings in Kiev and thus receiving their governing experience. (Please recall that it is from Novgorod Volodymir had to flee to Scandinavia when his father was killed on the Dniper rapids. To return to Kiev 5 years later with his uncle’s army to claim the throne!).

But the fact that Novgorod paid tribute to Kiev until King Yaroslav gave it certain freedoms, may even mean that in the eyes of Kiev Rus realm Novgorod was just a vassal entity.

– And what about Moscow?

It was a minor town which became known only in 1147 (almost 100 after the death of Yaroslav the Wise) only because two princes met there. The reason it remained small is that it was situated in swampy area.

In the language of the people who dwelt there “mosk” meant “swamp” or “wet”, so that is how the name Moskva (the way it is pronounced and written in Russia) appeared.

It’s funny to think that Moskva = Swampva. At least that is how it must’ve sounded for the people who spoke that dialect.

There is Bolotnaya (Swampy) Squire right in the center of current Moscow to probably remind the contemporary citizens of the fact, but it is impossible to forget because of the terrible smell of sulfur which appears there once in a while.

(In the current situation Ukrainians make a caustic joke about that smell, saying that the smell of sulfur is known for a long time as a telltale sign of the presence of some ominous creature from the Bible and the horror books. So every time there is the smell in Moscow, the Ukrainians try to jokingly guess the results of the Satan’s unusual activity).

As a recap, Moscow only in 1147  was basically founded, in 1156 fortified by wood, but 82 years later in 1238 already burnt during Mongol invasion.

It rebuilt quickly unlike the neighboring larger cities and you know why? Because it agreed and obtained responsibility to collect tribute from its neighboring cities for khan, thus becoming Ulus of the Golden Horde (Encyclopedia Britannica).

Yes, Moscow was Golden Horde’s ulus, collecting and paying first for 250 years to Sarai Batu on Volga River, and then – another 200 years to Crimean Khan.

The territory it controlled was called Muscovy until the year of 1721. And the people there were called muscovites.

Being for so long under Mongol and Tatar influence, it’s no wonder that Moscow Kremlin wears such resemblance to the China’s  Forbidden City.

So the only legacy Moscow can rightfully claim is the legacy of Golden Horde’s vassal state.

As for Moscow’s claims at Kiev Rus legacy and at being “elder brother” to Ukraine, a good mock-up picture is above

FC Liverpool’s guide to Kiev for the Champions’ League Final

John Steinbeck praises Ukrainian hospitality and cuisine: ‘Ukrainian borscht is a meal in itself’