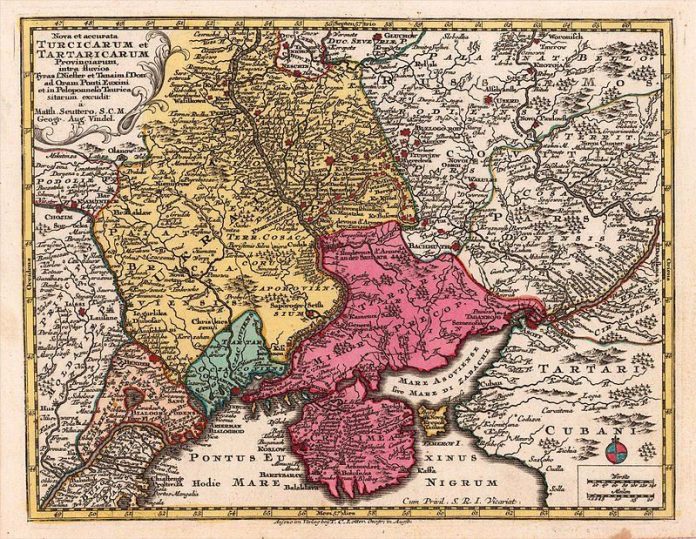 Some unwise people with the arrogant imperialist complex from the neighboring country try to claim that the name “Ukraine” means “outskirt” implying desolate community on the peripheria of civilization.

It is devoid of logic even for the reason that all through the Middle Ages Kiev remained educational and intellectual powerhouse (the stories of why Dostoyevsky and Chaikovsky ancestors had to leave Kiev are quite telling), but it did, as a nation on the whole, find itself on the brink, on the edge of constant danger.

With Dnieper River being as a line of last defence against the most powerful forces of those times.
They were nomads to the East, they were Crimean khanate to the south-east, they were Ottoman empire to the south and Muscovites to the north. Later on there will be countries like Poland among Ukraine’s rivals too which even controlled Kiev for some period of time.

So, living in Ukraine of those days meant living on the cutting edge defending itself and civilization.
For example, did you know that the one of the world’s largest slave markets of those times was situated in Crimea? It was Kaffa, present-day Feodosiya. The historians estimate that close to 6 million slaves were traded there in the times it existed between approx 1400 – 1700.
It is via Kaffa the famous Roxelana, the woman captured on the territory of the current Ukraine, but destined to become the Ottoman Empire sultan, was traded. The story reminds Biblical Joseph and his destiny in the Egypt captivity somewhat, does it not?

The slaves were brought there by two major routs – via current Ukraine along the Dnieper river and via Muscovy-Russia by Volga River. The readers of the previous part will not be surprised that one Muscovy-Russian city captured another and sold its inhabitants as slaves.
“The Novgorodian warlord Prokopii conquered the town of Kostroma in 1375, imprisoned many local men, women and girls and continued his raid along the Kama and Volga to the town of Bolghar, where the party sold all their Christian prisoners, “young girls and women,” to Moslem traders” (Medievalist).

In Ukraine the story was totally opposite – the “Moslim slave hunters” met the new force they will eventually lose to.
The story of that New Force is of almost Biblical, New Testament beauty about one “kernel of wheat” that falls to the gound, dies and produces many seeds instead” (John 12:24).
500 years later on the same Dnieper river rapids where Kiev King Svyatoslav-Svenald was killed in 972, in around 1470 the huge power of men appeared. The men who looked like Svyatoslav including even haircuts, who fought like him, who walked the same routs and attacked Constantinople, which at the time became Istanbul already.

They also treated each other like he. They were the Cossacks. True heirs, spirit and backbone of the Kiev Rus nation. Here are some quotations of their history.

As one can see, while the Muscovite-Russians helped enslave even of their own, the Ukrainian Cossacks attacked the slave market itself and freed all the slaves.
While Muscovite-Russians prefered cruel tsars and paternalism, Ukrainians prefered freedom and equality.
The Constitution written by Ukrainian cossack Pylyp Orlyk and currently kept in the National Archives of Sweden, is considered by many the first Democratic Constitution with division of powers in the world!

The two words and irreconcilable differencies between the two nations are portrayed by one world famous painter, Ukrainian Ilya Repin:

“Reply of the Zaporozhian Cossacks to the Turkish Sultan” – this is Ukraine and it’s spirit
And here is Russia – “Barge Haulers on the Volga“.

These two words are irreconсilable, there is existential conflict between the two.

Yes, in 1618 allied with Polish forces Ukrainian cossacks made Moscow accept their claims.
But unfortunately in 1709 allied with Swedish army they lost in the battle near Ukrainian city of Poltava.
But the conflicts, wars continued for centuries with Muscovy-Russia trying to eliminate the spirit and historical memory of the country – they prohibited traditions, history and even language in the area Muscovy occupied.

The Holodomor which stated exactly 84 years ago from today was basically part of this scheme – to break the backbone of the Ukrainian nation, to turn the Ukrainians into the same kind of slaves Muscovy-Russia has been all its history. Between 6-7 million died during that hideous crime. “Why Stalin starved Ukraine” gives a terrible account of it.

Ukraine survived Holodomor, it appears, only to have another trial of even larger magnitude when Hitler together with Stalin started WWII – the world remembers the joint parade of Nazis and Soviets in Polish Brest in 1939.

“We learn that “the Russians” suffered twenty-seven million losses before taking Berlin. Meanwhile, there is scant reference to the fact Ukraine saw far more of the actual fighting than Russia, nor to the millions of Ukrainians who fought in the Red Army. The scale of Ukraine’s human and material losses during the conflict defies comprehension, but the country barely gets a mention. This staggering omission demonstrates the sheer size of Europe’s Ukraine-shaped blind spot.
Some historians are already fighting back on Ukraine’s behalf. Yale’s Timothy Snyder, who has long led the field in the study of Ukraine’s blood-drenched twentieth century history, argues that from Hitler’s point of view, the purpose of World War II was the conquest of Ukraine and this emphasis on Ukraine should be central to our understanding of the war” (Atlantic Council)

AN-124 helps out Boeing in extreeme freezing conditions in Canada