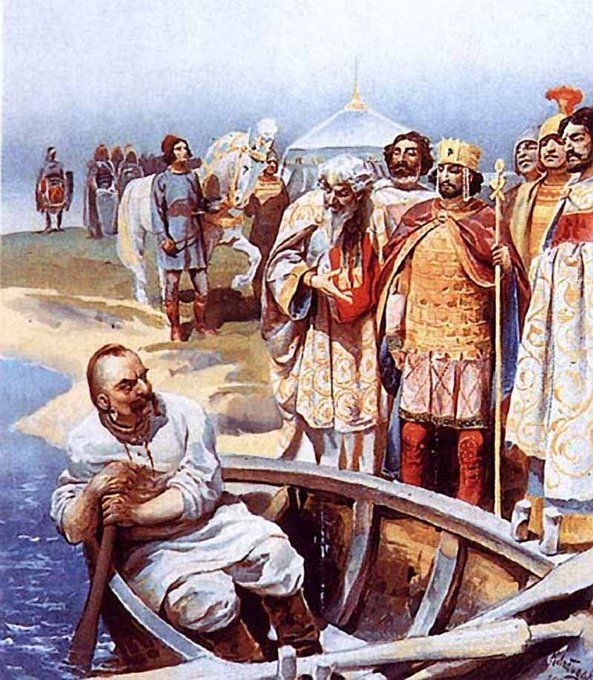 Some dates and facts first

– 860 a.c. In the summer of that year Vikings flotilla came down the Dnipro (Dnieper) river (the river that flows from north to the south dividing current Ukraine in half), crossed the Black Sea and attacked the city of Constantinople. Thus the shortest rout from the Baltic Sea to the Black one was made. A bit later it will be extended and be called the way “from Varangians to the Greeks”.

They were the Rus’ Vikings, a conglomerate of Swedish, Norwegian and Finnish Norsmen with the word “rus” meaning in Scandinavian “men who row”.

– 882. With Dnipro becoming such a lucrative trade artery, two Vikings clans start competing for best possible hub on the rout – the city of Kyiv. Situated on the hills, well positioned for defense and almost half the road it presented strategic advantage to the ones who controlled it.

That year on behalf of house Rurik a Viking chieftan Helgi (Oleh in the chronicles) captured Kyiv and killed two other Viking chieftans who had been in the city at the time. Their names were Dir and Askold and it may be hard to believe, but the Askold’s grave situated on the hill overseeing Dnipro downtown current capital of Ukraine is still there attracting thousands of visitors each year.

Here is how it looks now.

– 945. Ingvar (Ihor), Helgi’s successor was killed by a local tribe while collecting the tribute. The prince of the tribe proposed to Ingvar’s widow whose name was Helga (Olha).

Helga tricked the prince to Kyiv and had him killed on the boat. The other group of matchmakers were scalded to death in the Scandinavian steam bath.

She was the first ruler of the land to accept Christianity, so the Orthodox Church considers her equal to saint.

Here is a monument to Helga in Kyiv.

– 972. Sveinald (Sviatoslav) “the Brave” who was only 3 when his mother Helga became a widow and who spent all his life in different battles across Southern Europe while his mother reigned in Kyiv, was killed returning home from Byzantium on the Dnipro river rapids close to the place where the current city of Zaporizhia is situated.

Sveinald is the first one of the dynasty there is a physical description made by the Byzantine chronicler Leo the Deacon who met him in person. So, he was broad-shouldered, medium height with blue eyes and short and wide nose. He had a bushy long moustache but shaved his beard. His head was also shaven with one lock of blond hair untouched which was a sign of noble origin.

(This last trait of the unshaven lock of hair makes one wonder if that is not where the Ukrainian Cossacks’ tradition came).

Sveinald rowed equally with his men and the things that made him stand out were white clean clothes and a gold earring in one of his ears.

There is a monument to him in Kyiv

and a monument to Sveinald in once Ukrainian city of Belgorod

– 980. Volodymir, a Sveinald and one of his courtesans’ son becomes Kyiv king.

First, with the death of his father he had to flee to Scandinavia where he spent 5 years in his clan’s nest. Later, with his uncle’s military support he returned and wrestled Kiev from Yaropolk, one of his father’s several sons.

With all the military might Volodymir now had, he presented a serious power on the European map.

“With insurrections troubling Byzantium, the emperor Basil II (976–1025) sought military aid from Vladimir, who agreed, in exchange for Basil’s sister Anne in marriage. A pact was reached about 987, when Vladimir also consented to the condition that he become a Christian. Having undergone baptism, assuming the Christian patronal name Basil, he stormed the Byzantine area of Chersonesus (Korsun, now part of Sevastopol, Crimea) to eliminate Constantinople’s final reluctance. Vladimir then ordered the Christian conversion of Kiev and Novgorod, where idols were cast into the Dnipro River after local resistance had been suppressed.” (Britannica)

In 12th century the land is first mentioned as Ukraine. Russia does not exist

History of Ukraine as seen by Constantinople Patriarchate