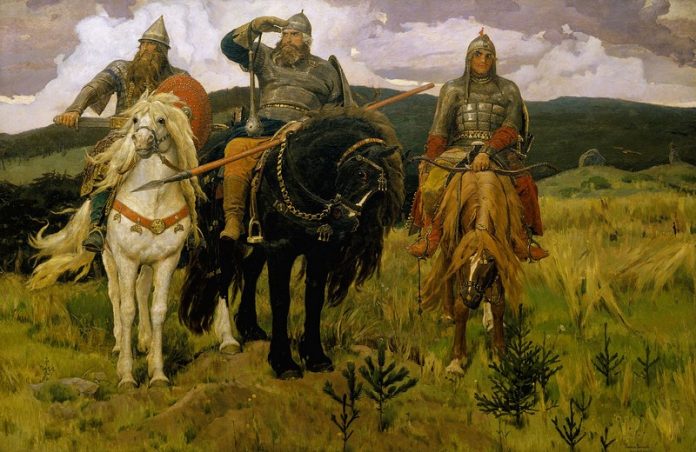 “Out of the three Russian folk heroes, the so-called bogatyrs (Ilya Muromets, Dobrynia Nikitich and Alyosha Popvich), Ilya is the most famous one, as well as the group’s leader. More stories are associated with his name and, unlike his mythical counterparts, the stories about him have a distinct chronological structure.

The chronicles suggest the famous Russian hero spent 33 years of his life lying on a stove. The original old Russian stove has a sleeping loft on the top which mainly was used as a resting place. The mysterious illness which kept paralysed Ilya’s body for long years was miraculously cured by three religious wanderers.

After long years of service to Vladimir the Great, the ruler of Kiev Rus, Ilya Muromets decided to leave his military career and dedicated the rest of his life to God and became a monk. Some historical records suggest he spent last years of his life in Kiev-Pecherski Monastery, where he was buried and declared a saint after his death.” (Look4ward.co.uk) Comment:The Three Legendary Heroes were from Kiev Rus. They were Rusians (with a single “s”), or Ruthenians, in modern term – Ukrainians!They were not “russians” because there was no country with such a name in those times!Ilia Muromets is actually buried in Kiev – the aricle is correct about that.

Turret of Russian tank: ‘I can fly, my friend!”