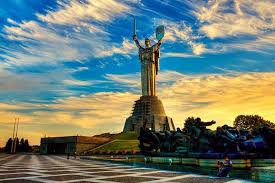 Another option is to balance attendance in Moscow with participation in rival ceremonies being held in Ukraine on the previous day, 8 May.

The government in Kyiv is working hard to present the Ukrainian ceremonies as a more appropriate way of commemorating the suffering of the second world war, without the risk of endorsing Russian aggression.

“Ukraine is marking 8 May as a Day of Remembrance and Reconciliation along with the whole democratic world,” a Ukrainian official said. “Five years ago on the occasion of the 70th anniversary of the end of world war two, Ukraine rejected the Soviet (now Russian) style of honoring Stalin’s victory over Nazism.

Scythian King’s gorytos with the scenes of The Achilleid epic

‘Ukrainian landscape with chumaks in the moonlight’ by I. Aivazovsky