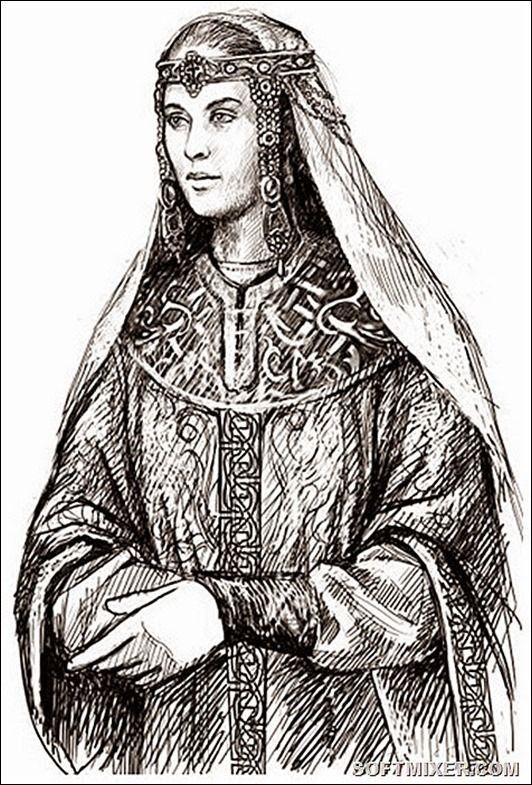 ” When he was fifteen years old, in 1030, Harald fought in the Battle of Stiklestad together with his half-brother Olaf Haraldsson (later Saint Olaf). Olaf sought to reclaim the Norwegian throne, which he had lost to the Danish king Cnut the Great two years prior. In the battle, Olaf and Harald were defeated by forces loyal to Cnut, and Harald was forced into exile to Kievan Rus’ (the sagas’ Garðaríki). He thereafter spent some time in the army of Grand Prince Yaroslav the Wise, eventually obtaining rank as a captain, until he moved on to Constantinople with his companions around 1034. In Constantinople, he soon rose to become the commander of the Byzantine Varangian Guard, and saw action on the Mediterranean Sea, in Asia Minor, Sicily, possibly in the Holy Land, Bulgaria and in Constantinople itself, where he became involved in the imperial dynastic disputes. Harald amassed considerable wealth during his time in the Byzantine Empire, which he shipped to Yaroslav in Kievan Rus’ for safekeeping. He finally left the Byzantines in 1042, and arrived back in Kievan Rus’ in order to prepare his campaign of reclaiming the Norwegian throne. Possibly to Harald’s knowledge, in his absence the Norwegian throne had been restored from the Danes to Olaf’s illegitimate son Magnus the Good.

It is possible that the marriage with Elisiv had been agreed to already during Harald’s first time in Rus’, or that they at least had been acquainted. During his service in the Byzantine Empire, Harald composed a love poem which included the verse “Yet the goddess in Gardarike / will not accept my gold rings”[59] (whom Snorri Sturluson identifies with Elisiv), although Morkinskinna claims that Harald had to remind Yaroslav of the promised marriage when he returned to Kiev.[60] According to the same source, Harald had spoken with Yaroslav during his first time in Rus’, requesting to marry Elisiv, only to be rejected because he was not yet wealthy enough.[61] It is in any case significant that Harald was allowed to marry the daughter of Yaroslav, since his other children were married to figures such as Henry I of France, Andrew I of Hungary and the daughter of Constantine IX.

In 1047, Magnus and Harald went to Denmark with their leidang forces. Later that year in Jylland, less than a year into their co-rule, Magnus died without an heir. Before his death, he had decided that Sweyn was to inherit Denmark and Harald to inherit Norway.[73] On hearing the news of Magnus’s death, Harald quickly gathered the local leaders in Norway and declared himself king of Norway as well as of Denmark.[74] Although Magnus had appointed Sweyn his successor as king of Denmark, Harald immediately announced his plans to gather an army and oust his former ally from the country. In response, the army and the chieftains, headed by Einar Thambarskelfir, opposed any plans of invading Denmark.  https://en.wikipedia.org/wiki/Harald_Hardrada