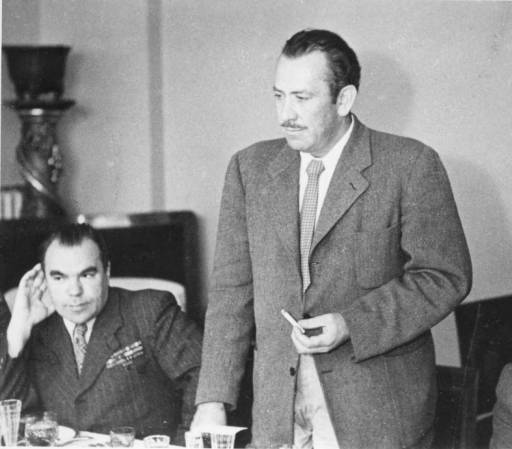 “Everyone had told us it would be different once we got outside of Moscow, that the sternness and the tenseness would not exist. And this was true. On the airfield we were met by a number of Ukrainians from the local Voks. They were laughing people. They were more gay and more relaxed than the men we had met in Moscow. There was an openness and a heartiness about them. They were big men, nearly all blond, with gray eyes. They had a car ready to drive us into Kiev.

“Our Ukrainian guide was Alexis Poltarazki, a large man, who limped a little from a wound received at Stalingrad. He is a Ukrainian writer, with a fine command of English, and a great sense of humor, a man of warmth and friendliness.

“Although Kiev is greatly destroyed while Moscow is not, the people in Kiev did not seem to have the dead weariness of the Moscow people. They did not slouch when they walked, their shoulders were back, and they laughed in the streets. Of course this might be local, for the Ukrainians are not like the Russian; they are a separate species of Slav. And while most Ukrainians can speak and read Russian, their own language is a language apart and separate, nearer to the Southern Slavic languages than to Russian. Many Ukrainian words, particularly farm words, are the same as in Hungarian, and many of their words are duplicated in Czech rather than in Russian…”

(COMMENT. The great writer saw and sensed the difference at once. The only thing he was mistaken about is about attributing Muscovites to the Slavs. In fact, they belong to the Volga Finnih group – Wikipedia).

“There was a fine feeling of friendship in these men…”

“…no savage tribe, no invader, ever was responsible for the stupid, calculated cruelties of the Germans. They raged through the country like frantic, cruel children. And now the lines of prisoners in their German army uniforms march through the streets, to work at cleaning up the destruction they caused. And the Ukrainian people do not look at them. They turn away when the columns march through the streets. They look through these prisoners and over them and do not see them. And perhaps this is the worst punishment that could possibly be inflicted on them.”

“In the evening we went to the theater to see the play Storm, a nineteenth-century drama enacted in the nineteenth-century manner. The scenery was quaint and old-fashioned, and the acting was old-fashioned too. It is odd that it should be played, but it is a Ukrainian play, and they love their own… It seemed odd to us that the people in the audience, who had known real tragedy, tragedy of invasion, and death, and desolation, could be so moved over the fate of the lady who got her fingers kissed in the garden.”

The walls are white, and there are shutters on the windows to be closed against the winter cold.

Opening off this room are one or two bedrooms, depending on the size of the family. And since these people lost everything, the bedding is whatever they can get now. Pieces of rug, and sheepskin, anything to keep them warm. The Ukrainians are a clean people, and their houses are immaculate.

Full of laughter and songs despite losses

The town had lost fifty men of fighting age and fifty others, of all ages, and there were great numbers of crippled and maimed. Some of the children were legless and some had lost eyes. But the town, which needed labor so dreadfully, tried to give every man work to do that he could do. All the cripples who could work at all were put to work, and it gave them a sense of importance and a place in the life of the farm, so that there were few neurotics among the hurt people.

They were not sad people. They were full of laughter, and jokes, and songs.

Ukrainian villagers did not even speak Russian

These farmers did not even speak Russian, they spoke Ukrainian.

“Our time in Kiev was up, and we prepared to fly back to Moscow. The people here had been most hospitable, and most kind and generous, and besides that we had liked them very much. They were intelligent, laughing people, people with a sense of humor, and people with energy. In the ruins of their country they had set out doggedly to build new houses, new factories, new machinery, and a new life. And they said to us again and again, ‘Come back in a few years and see what we will have accomplished.’