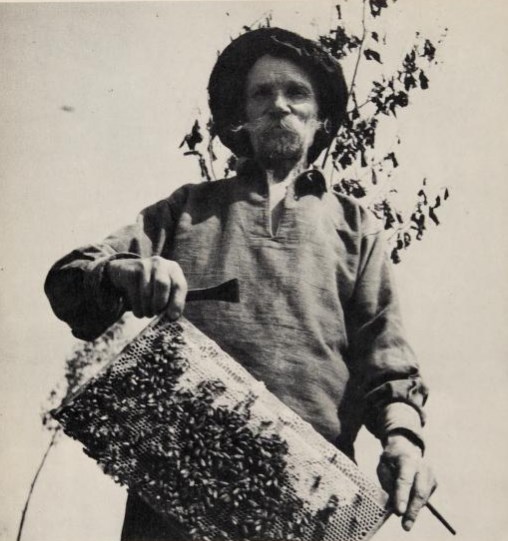 We moved on to a flowered meadow where there were hundreds of beehives, and a little tent where the beekeeper lived. The air was filled with the soft roar of bees working in the clover of the meadow. And the old bearded beekeeper came walking rapidly toward us, with nets to put over our faces. We put them on and shoved our hands in our pockets. The bees buzzed angrily about us. The old beekeeper opened his hives and showed us the honey. He had been a beekeeper for thirty years, he said, and he was very proud. For many years he had kept bees without knowing much about bees. But now he was reading and studying. And he had a great treasure, he had six new queens. He said they came from California. And I judged from his description that they were some California variant of the Italian black. He said he was very happy his new bees. He said that they would be more frost resistant, that they would work earlier and later in the season.

Then he took us into his little tent and closed the flaps, and he cut great slices of the good black sour rye bread of the Ukraine, and put honey on it, and gave it to us to eat. The deep hum of the bees came from outside. And later he opened the hives again and brought out handfuls of bees without fear, as most beekeepers do. But he warned us not to uncover ourselves, for the bees do not like strangers.”

Have you heard of Petro Prokopovych? Did you know that Ukraine is the motherland of commercial beekeeping?

Ukrainian Brand Among 20 Fashion Brands Getting Most Creative With Coronavirus Face Masks –...