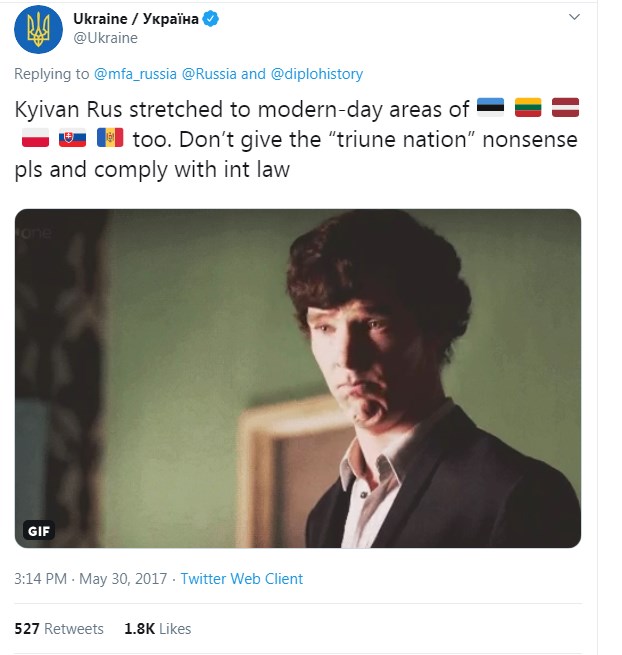 Do you want an example of a perverted logic of international scale?

In 2014 Putin annexes Crimea, part of Ukraine, on the grounds that Kyiv (!) Prince Vladimir the Great was baptized there into Christianity.

Once again – Moscow took away from Kyiv part of Kyiv territory because Kyiv Prince was baptized there!

Because Vladimir, who later on baptized Kyiv Rus in the river Dniper in Kyiv! (The Economist article)

There is a monument to Vladimir holding cross on one of the hills in Kyiv overseeing possible place of that event, but last year Moscow, which did not exist during those times, installed a larger statue to Vladimir of their own. Why all this? Because Moscow wants to have some connection to that great state! That is why!

One wonders why stop at Vladimir, – why not annex Jericho river where Jesus was baptized?

Yesterday, in Versailles during joint press-conference with French President Macron, Putin declared that Russia and France are united by common history in that Queen of France Anna was “Russian”.

Such blatant lies Putin pronounces are truly shocking and hard to deal with.

For those readers seeking deep knowledge I would advise reading first my blog Ukraine is not Russia  and follow the Harvard Professor Serhii Plokhy’s works mentioned there.

For those who would like to have Macro View, these are main points:

1. Anna, the Queen of France was born and raised in Kyiv and has multiple monuments all over France where she is mentioned as Anne De Kyiv

2. At the place where there is Moscow now were multiple bogs and the first settlements appeared there only 200 years after the times of Anna.

3. The country that formed around that settlement was called Muscovy and existed under this name until 1721!! The only interaction with Kyiv Rus was when Muscovy princes made several attempts to seize and destroy Kyiv!

4. Until the times of Peter the First or, beginning of the 18th century that country, Muscovy for almost 500 years (!!) paid tribute to Golden Horde (mongols) and later on to Crimean khahanat (tatars). Ivan 4th “the Terrible” did not pay tribute to Crimean khan once and then had to run for his life deserting Moscow which was burnt to the ground in 1571.(link)

5. To hide that shame, Peter the 1st RENAMED his country taking the name of ancient Ukraine – Kyivan Rus! He also declared his country an empire and self-proclaimed himself an Emperor!

Once again – RUSSIA – is a stolen name and the country with that name is only 300 years old!

6. Knowing well that he is a ruler of a barbarous nation, Peter hired multiple foreign specialists to at least create some resemblance of a culture. That is how Saint-Petersburg was built by the way – only thanks to Italian architects and German specialists. That is why the city has German ending in it – Burg!

On “barbarous country” above. Even famous Russian poet Lermontov wrote a poem with the words:

7. Without longer history, “Russia” truly looked like a fake, so for all these 300 years it was trying to expropriate Ukrainian history and part of the war Russia is waging against Ukraine now is because it tries to hide that theft.

That is why installing monuments to Kyiv princes in Moscow and calling Kyiv Princess their own.

Current “Russia” has such a relationship to Kyivan Rus-Ukraine, as current Romania does to the Ancient Rome (with all the respect to Romania from my side).

Perfect answers of Ukrainian Ministry of Foreign Affairs to the Russian one on Twitter on the subject.

Kyiv Rus included territories of Estonia, Poland, Moldova, Slovakia, Litvenia, Latvia which does not mean that all those countries can claim Kyivan Princes and Princesses as their own!