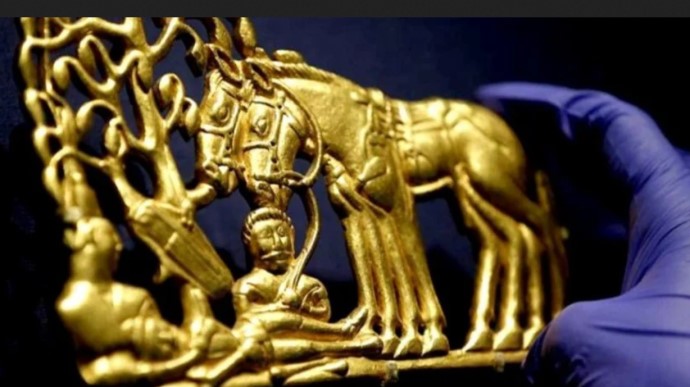 Not many people know that Homer mentioned Scythians in his Iliad, only they are mentioned in it under different name. Here is the passage:

Now Zeus, when he had brought the Trojans and Hector to the ships, left the combatants there to have toil and woe unceasingly, but himself turned away his bright eyes, and looked afar, upon the land of the Thracian horsemen, and of the Mysians that fight in close combat, and of the lordly Hippemolgi that drink the milk of mares, and of the Abii, the most righteous of men. To Troy he no longer in any wise turned his bright eyes, for he deemed not in his heart that any of the immortals would draw nigh to aid either Trojans or Danaans. (Iliad, XIII.1-3, translation by Murray)

Aeschylus, too, is clearly pleading the cause of the poet when he says about the Scythians: “But the Scythians, law-abiding, eaters of cheese made of mare’s milk.” And this assumption even now still persists among the Greeks; for we regard the Scythians the most straightforward of men and the least prone to mischief, as also far more frugal and independent of others than we are. (Geography, VII.7)

At the time of Trojan War, the Scythians had the law. They were of such a character, that even the Greeks admitted their excellence above themselves in terms of frugality and independence.

Zeus was their god as well. Otherwise, he would not have turned his eyes in their direction during the most decisive moments of the Trojan War.

Check Royal Scythia, Greece, Kyiv Rus to find out how Achilles may be connected to Scythia.

Chinese Dragons were borrowed from Scythians?