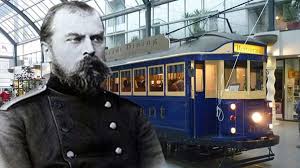 “..engineer of Ukrainian origin and inventor of the world’s first railways electrification system and electric tram. While the commercialization of his inventions in Russia was relatively slow, Pirotsky is known to have met with Carl Heinrich von Siemens and influenced Siemens’ eventual introduction of the first regular electric tram line for the Berlin StausBenbahn.” (Wiki)