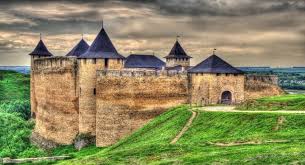 “From the 13th century, the territory was widely contested and fought over between Lithuania, Poland, Austria-Hungary, the Ottoman Empire and Russia. A Cossack republic emerged and prospered during the 17th and 18th centuries, but its territory was eventually split between Poland and the Russian Empire, merging with the Soviet Union until its eventual collapse. This variety of cultures is presented in the rich architectural history and diversity of castles across Ukraine today.” (Heritagedaily)