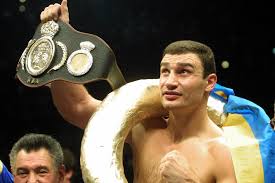 “Klitschko was elected to the Hall of Fame in December, three years after he decided to re-enter politics in his native Ukraine. Also inducted Sunday were four-division world champion Erik Morales and light middleweight champion Ronald “Winky” Wright, while Sid Terris was honored posthumously in the old-timer category.” (Washington Post)