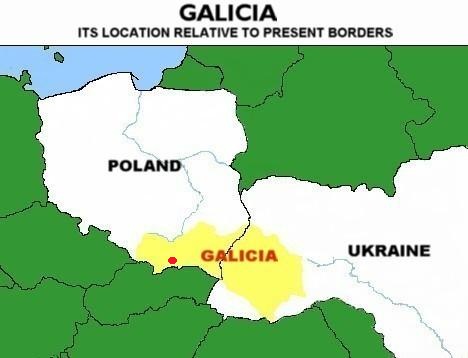 “The lands of the Commonwealth seized by Austria in the partitions of 1772 and 1795, known as “Galicia and Lodomeria” were home to more than two million East Slavic peasants. Catholic Poles were the available ruling class, and Galicia was left under the control of Polish landholders.“

During the Middle Ages, eastern Galicia, situated between Hungary, Poland, and the western principalities of Kiev and Volhynia, was coveted by its neighbours for its fertile soil and its important commercial connections. Incorporated into Kievan Rus by Vladimir I (Grand Prince Vladimir) in 981, eastern Galicia (also called Red Ruthenia, or Red Rus), being the country around Halicz (Galich, or Galych) on the upper Dniester. (Britannica)

Full ceremonial name: The Kingdom of Galicia and Lodomeria and the Grand Duchy of Krakow with the Duchies of Auschwitz and Zator.

“LODOMERIA” was a Latinized name for Volhynia, derived from a town whose eponymous founder was Vladimir the Great, the king who Christianized the Kievan Rus’ and mentioned above.

“GALICIA” was named by the Habsburg dynasty after the medieval principality of Halych. One of the theories states that “Halych” derives from the Slavic word “halka” , “jackdaw” in English. Jackdaw featured on the coat of arms of the Kingdom of Galicia and Lodomeria is a sign that the theory is true.

Apart from Ukrainians and Poles, there was a strong Jewish community.
The Jews of Galicia had come in the Middle Ages from Germany and mostly spoke Yiddish as their first language. German-speaking people were more commonly referred to by the region of Germany where they originated (e.g. Saxons or Swabians).

“Austrian imperial policies as executed by loyal Austrian Poles in Lwów/Lemberg/L’viv established a link to Kijów/Kiev/Kyiv. In Kyiv, the main problem for Ukrainians was the Russian censor, and many Ukrainophiles were Poles.”
During the first decades of Austrian rule, Galicia was governed from Vienna.
Ukrainian idea was becoming so appealing that even some prominent Poles became proponents of it.

But the main events for the future of Ukraine will happen closer to the end of 19th century and are connected with the name of the great Ukrainian historian Mykhailo Hrushevs’kyi.

“Hrushevs’kyi’s arrival in L’viv from Kyiv in 1894 provided intellectual support to the Ukrainophile orientation in Galicia. His lectures in the Ukrainian language lent it credibility as a means of scholarship and enlightenment. The ﬁrst volume of his History of Ukraine-Rus’, the most important text in the construction of a Ukrainian historical narrative, followed in 1898. Its most substantial innovation was the elaboration of a coherent history of Ukraine, beginning with Kyivan Rus’.
By refuting the Russian historiographical claim that Moscow had inherited ancient Kyivan traditions, Hrushevs’kyi provided the basis for a political challenge to the Russian claim to all Ukraine. By treating the common people as part of history, Hrushevs’kyi undermined the traditional distinction between “historical” and “unhistorical nations,” the basis for the Polish claim to Galicia.
Immediate Ukrainian demands to Vienna were a partition of Galicia and Ukrainian autonomy in the eastern part; proportional representation in the Galician and Austrian parliaments; and the Ukrainization of Lwów University. The long-term goals were the creation of a Ukrainian nation and the establishment of a Ukrainian state with “ethnic” borders.”

“During the First World War, in which Austria fought Russia, Vienna persecuted Galicians it regarded as pro-Russian, indirectly aiding the Ukrainian cause. Galician Ukrainian politicians in Vienna favored the establishment of an independent Ukraine in lands taken from the Russian empire, with close associations with a newly autonomous eastern Galicia. This was a breath away from open support of Ukrainian independence in all Ukrainian lands. Independence seemed like a real possibility after the February Revolution in Russia and the proclamation of a Ukrainian National Republic in Kyiv in early 1917. Galician Ukrainians took seriously the rhetoric of Wilsonian self-determination after the American entry into the war in April 1917. There was some cause for optimism, no matter who won the war: or so it seemed.”

“After Denikin’s defeat, the Western powers supported Poland as a counterweight to Bolshevik Russia, which implied accepting Poland’s claim to eastern Galicia and Lwów.
The two Ukrainian states founded after the war, with capitals in L’viv and Kyiv, had to meet Polish and Russian challenges without allies. In these circumstances, Ukrainian elites required an extraordinary effort of organization, which was lacking.

The Kyiv state was riven by ideological disputes among its leaders, crippled by the weakness of crucial institutions such as the army, unable to make itself heard among the peasantry, and thus overwhelmed by an array of external (and internal) military forces.6
West Ukrainian Republic was defeated by July 1919, and forced to establish a government-in-exile in Vienna. The war cost Galician Ukrainians ﬁfteen thousand men, created a generation of frustrated veterans, and conﬁrmed a prevailing belief that Poland was the main enemy of Ukraine.”