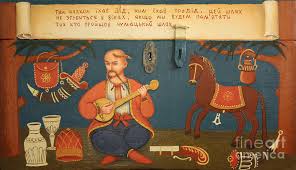 “The mythological figure of Cossack Mamai.. is a reflection of the most typical traits and mentality of the Ukrainian Cossack – a combination of strong warrior-defender and lyrical kobza-playing bard-musician with a relaxed attitude towards life

The following lyrics should help understand how dear kobza-bandura was to a cossack:

Mamai’s closest friends as depicted in the paintings are his horse, his tobacco pipe and his bandura. But at his death, Mamai considers first of all what to do with his beloved bandura:

My golden, ornate bandura,
My faithful companion,
Where shall I hide you?

Should I lay you in the grave,

Should I drown you?

Should I set you free as ashes in the wind,

The wind strums your golden strings

It will play and sing for you

And folks will remember the poor Cossack

“Folk art images of Mamai reached a peak of popularity during the era of the Ukrainian Cossack state, when its paintings adorned nearly every house: from the humble dwellings of peasant farmers and Cossack warriors, to the mansions of affluent Ukrainian nobility. Traditionally, the Cossack Mamai paintings were staples in the interior decor of the highest ranking Cossack leaders, including their last supreme leader, Hetman Pavlo Skoropadsky.

Upon the destruction of the Zaporizhian Cossack Republic (Sich) in southern Ukraine (1775) and loss of autonomy of the Cossack state Hetmanate in north-eastern Ukraine (end of 18th century) by the Muscovites, the image of Cossack Mamai acquires an additional meaning – as warrior-defender, rebel-insurgent, and avenger – a kind of Ukrainian Robin Hood, who defends the Ukrainian peasantry from abuse by the Muscovite and Polish oppressors and their helpers: rent and tax collectors. Little wonder that under these circumstances, the image of Cossack Mamai attained almost iconic significance and was proudly displayed in the most respected spot of the Ukrainian house – on the interior wall across from the icons of Jesus Christ and the Virgin Mary. Additional proof that these images bore some measure of sacred symbolism was the fact that masters of icon painting from the renowned Kyiv Pechersk Lavra monastery also produced paintings of Cossack Mamai”.

“With the notable exception of some rare paintings, where Cossack Mamai holds his hands on his chest or stomach in a gesture with a striking resemblance of the ritualistic gestures on the images of the Polovtsian stone stelae or Buddhist statues, we almost always see Mamai in the company of the traditional Ukrainian string instrument, the kobza. This long-mustached Cossack-bard, with his unique Cossack hairstyle, are consistently seen in folk art paintings of Cossack Mamai. These paintings also carry strong associations with the glorious era of the Ukrainian Cossack state, as well as with the wandering bards (kobzars), whose epic songs told tales of heroic and tragic events

A more contemporary take on the Cossack Mamai image can be found in the artwork of the Lviv-based artist Orest Skop. In the early 1990s, Skop learned about the horrific tragedy of the Ukrainian kobza–playing bards of December of 1934. In a village near Kharkiv, Ukraine, at the order of Joseph Stalin, the Soviet NKVD political police summarily executed the elite of the Ukrainian bards – 337 kobzars, most of them blind, together with the children who acted as their seeing-eye guides”

25 years ago by signing Budapest Memorandum, Ukraine gave away the third largest nuclear...