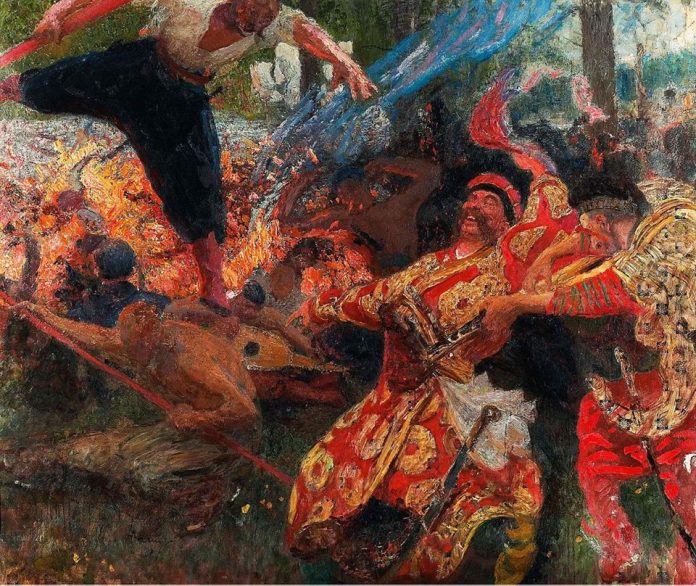 “..when Kozaks returned victorious after battle. Kobzars and other musicians would gather their instruments – violins, bagpipes, cimbaloms and fifes – while other participants would dance. These celebratory hopaky were performed only by male participants, as they took place in an all-male environment. The performers were young, boisterous mercenaries, and not professional dancers; as such, the dance steps performed were predominantly improvisational, reflecting the performers’ sense of manliness, heroism, speed and strength.

The steps exhibited included many acrobatic jumps. Often fights from the battlefield would be re-enacted in pantomime, with real swords, lances or other weaponry, as the performer lashed out at invisible enemies”. (Wikipedia)

So, when you look at their Hopak dance, you will not just feel the Cossack spirit, but you will see incredible martial art skills such as modern days karate or taekwondo:

In 1710 the Ukrainian Cossacks drafted one of Europe’s first state constitutions, which had established the democratic standard for the separation of powers in...

During his speech at a dinner in Kiev in 1972, President Nixon named Kiev the “City of Golden Gates” and compared it to San...

Term “Little Russia” and the beginning of occupation of Ukraine (Quotes from a Yale...

Historic Event – Holy Synod proceeds to the granting of Autocephaly to the Church...