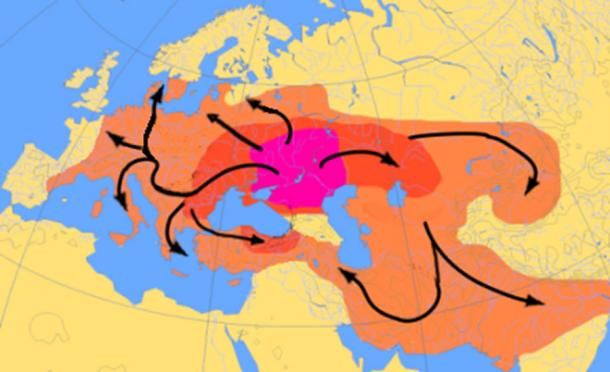 Translation of the original text in Swedish:

When the host of the documentary series “The first Swedes tested its DNA, showed that his genetic makeup was largely identical to that of the people who lived here for 4 500 years ago. And the greater part of this genetic heritage comes from – Ukraine.

In the documentary series “The first Swedes”, traveling archaeologist Jonathan Lady around in Sweden in search of traces of the first people who settled here.

But how much of the early hunters and farmers remain in us who live here today?

Jonathan Lady sounded test how much of his own DNA that can be traced back to the stone age.

The result shows that he carries on the tracks of the first hunters who moved in after the ice age released their grip on Scandinavia, for 11 000 years ago. Another part of his genetic makeup comes from the earliest of the peasant population that immigrated 5 000 years later.

– The legacy of the hunters might turn out in Jonathan’s bright eyes, and from the peasant population, he got his pale skin color, says Mattias Jakobsson, arkeogenetiker at Uppsala University.

*The missing piece of the puzzle*

But there is still a big piece of the puzzle – the grey piece in the middle of the chart.

Mattias Jakobsson works to identify the early people’s genetic makeup, and he explains that it is another huge wave of migration that has put his mark on the most northern Europeans today.

Towards the end of the stone age, about 5000 years ago, there began to flood into people from the steppe in the current Ukraine to Western Europe.

The settlers moved with the help of tamhästar and cars – and their progress would shake this part of the world.

Used the plague – it was the young men who were willing to take a risk, and we believe that they have joined forces in fighting groups, “says Kristian Kristiansen, professor of Archaeology at the University of Gothenburg.

The newcomers are known by the Russian name Yamnaya, which means pit and has to do with the condition of the culture’s funeral. Steppe pastoralists took not only the violence to help in the colonization of Europe. The exploited at the same time, an even more effective weapon.

The plague occurred on the steppe and apparently spread westwards to European farmers in connection with the large Yamanya-invasion.

“I would compare this migration with the European colonization of the Americas. It was helped also by deadly diseases that struck out the native people, “said Kristian Kristiansen.

This talk of stridsyxekulturen after their important status object, a type of boat-shaped ritual stone hammers.

Stridsyxemänniskorna brought a lot of news. They spoke a new language, Proto-Indo-European, which is the predecessor of the Swedish we talk today. And the evidence suggests that they took with the all new customs. Among other things, came the knowledge of how to BREW beer to the North at this time.

Inheritance from the steppe stridsyxemänniskor The oldest we know of were discovered in Sweden in connection with a roundabout at the road in Linköping in the 1950 ‘s.

Geneticist Helena malmstrom at Uppsala University has examined DNA from the approximately 4 500 years old skeletons, and she can see that they have mixed a bit of the old people, but that most of their genetic material comes from the steppe pastoralists who migrated from Ukraine some hundred years earlier:

We see that they have a part in their heritage that originates from these early hunter and peasant groups, but a large part of their genetics, the blue part, is this Yamnaya component, she says.

And this explains the missing piece of jigsaw in Jonathan Lindström’s DNA. The people who poured into Europe in the Stone Age still dominate his heir after 5,000 years.

It is clear that I am surprised by how much stone age I am, says Jonathan Lindström.

All backgrounds of Northern Europe

And it’s not just Jonathan Lindström who looks almost exactly the same as the battle ax people. The same pattern is seen in almost all northern Europeans today.

– All people who have their roots up here are quite similar, says Helena Malmström.

This means that the Yamnaya shepherds have not only left a new language and new customs. They still remind themselves of the biology of many northern Europeans.

– These steppe nomads develop a mutation for length. What we also have from the steppe are genes for lactose tolerance, that is, we can consume milk, says Kristian Kristiansen.

Jonathan Lindström himself does not think that it is the biological heritage of the Stone Age in us modern-day people who are the most important with modern DNA technology.

“What is interesting is how old DNA can help us archaeologists follow human migrations thousands of years ago, and understand how societies functioned at that time,” he says.

You can see more about this in the documentary series The first Swedes on SVT Play.