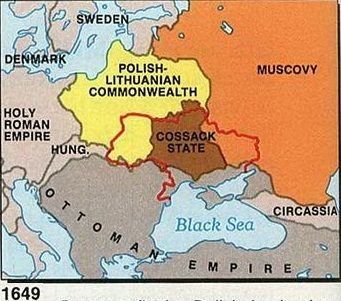 While Moscow, as Ulus Jochi was collecting tribute from its realm for the Golden Horde (see Previous Part), it is worth while looking at what was happening in the realm of the Kiev Rus.

Quotes below are from “The Reconstruction of Nations: Poland, Ukraine, Lithuania, Belarus, 1569-1999” by Timothy Snyder published in 2003 (the publishing year should remove possible accusation of political bias connected with the events of the past 4 years).

“Lithuanian grand dukes were the great warlords of thirteenth- and fourteenth century Europe. They conquered a vast dominion, ranging from native Baltic lands southward through the East Slavic heartland to the Black Sea. Picking up the pieces left by the Mongol invasion of Kyivan Rus’, the pagan Lithuanians incorporated most of the territories of this early East Slavic realm. The Orthodox boyars of Rus’, accustomed to Mongol overlordship, could regard Lithuania not as conqueror but as ally. As Lithuanian military power ﬂowed south, to Kyiv, so the civilization of Rus’—Orthodox religion, Church Slavonic language, and mature legal tradition—ﬂowed north to Vilnius.”

– Even after the Mongol invasion, the civilization flowed from Kiev to the West.

Having annexed Galicia, a former province of Kyivan Rus’ known in Poland as the “Rus’ Palatinate” (“Województwo Ruskie”), Poland also had its share of Orthodox churchmen and Church Slavonic scribes. Having divided the lands of Kyivan Rus’, Poland and Lithuania shared its cultural inheritances”.

“In Muscovy the state language of the Grand Duchy of Lithuania, which we are calling “Chancery Slavonic,” was called “Lithuanian” or Belorussian.” Although modern Russian historians sometimes call this language “Russian,” at the time Muscovite scribes had to translate the Lithuanian statutes into Moscow dialect for them to be of use to their court”.

– Muscovy could not understand “Russian language”!!

“Since Lithuania for a very long time included a majority of Orthodox subjects and most of the Kyivan patrimony, it was called a “Rusian” realm. In unifying his domains with Poland in 1385, (king) Jogaila acted as “Grand Duke of Lithuania and Lord and Heir of Rus’.” In a 1449 treaty between Poland-Lithuania and Muscovy, the former was called “Rusian,” the latter “Muscovite.” After the fall of Constantinople to the Turks in 1453, Muscovy espoused spiritual and political claims as the seat of Orthodoxy, the heir of Byzantium, and the successor of Kyivan Rus’.”

– It’s only after the fall of Constantinople in 1453, Muscovy “espoused claims” to become Rusian!

“These provided the justiﬁcation for Muscovy’s wars with their fellow East Slavs of Lithuania, whose grand dukes had regarded themselves for a century as the successors of Kyivan princes. In practice, Muscovy’s claim to be Rus’ pushed Lithuania toward Poland. When Ivan IV (the Terrible, reigned 1530-1584, proclaimed tsar 1547) began the Livonian Wars in 1558, he hastened the Polish-Lithuanian Union of 1569. At that time, of course, Poland-Lithuania also claimed to be Rus’: Zygmunt August’s titles, as listed in the privilege of 1569, were “King of Poland, Grand Duke of Lithuania, Lord and Heir of Rus’, Prussia, Mazovia, Samogitia, etc.”

– Muscovy needed Kiev Rus’ legacy so bad, it started the wars with Lithuania and Poland! Now please have a closer look at the beginning of war between “Russia” and Ukraine, especially rhetoric of “holy place” during Crimea annexation, and answer the question if it is still the case of trying to appropriate the history!

“The Lublin Union of 1569 deﬁned early modern Ukraine by transferring East Slavic lands from Lithuania to Poland. Most of the lands of Kyivan Rus’ had been acquired by Lithuania in the fourteenth century, Kyiv city coming under Lithuanian dominion in 1363. Polish King Kazimierz (the Great) had seized Galicia and L’viv in 1349. For about two hundred years, most of the patrimony of Kyivan Rus’, including the lands we now call Ukraine, was divided between Lithuania and Poland…

The Lublin Union was..  a repartition of old Rus’, on terms favorable to Poland. Lithuania retained its more northerly Slavic territories now known as Belarus. Lithuania ceded to Poland its most southerly territories, the Bratslav, Kyiv, and Volyn’ regions, most of what is now Ukraine. Braclaw, Kijów and Wolyn ´ joined Galicia as territories within the Polish Kingdom…Kyiv city, the capital of ancient Rus’, was suddenly part of Poland.”

A source of high culture in medieval Lithuania, Ukraine became the target of civilizers in early modern Poland. Ukraine had provided medieval Lithuania with Christianity and writing; Ukraine received from early modern Poland Reformed Christianity and the printed book. In these ways, the 1569 transfer marks the end of medieval Rus’, as continued within Lithuania; and the beginning of early modern Ukraine, comprised of East Slavic lands included in Poland.
Just as the history of medieval Rus’ begins with the Orthodox baptism of Grand Duke Volodymyr in 988, so the history of early modern Ukraine begins with conversions of Ukrainian nobles to Western Christianity after 1569
From controversy over Union arose a political lexicon. The traditional sacral designation “Rus’” had been used in a political sense for centuries; now the vague military term “Ukraina” took on something like a political meaning as the homeland of the Orthodox in Poland.8 The Lublin Union of 1569 had separated East Slavs in Ukraine from their northern counterparts in the Grand Duchy.

– Yale Professor has reasons to also state that the name “Ukraine” is a MILITARY term! There are Ukrainian worlds like “Ukriplennya” (“Reinforcement”) and “Ukryttya” (“Shelter, Defense”) which have a similar beginning and are from military lexicon, so it is likely the word Ukraina meant just that for the Commonwealth – “Reinforced Defense”.

The following quote proves the suggestion:

“In 1569, the Polish Kingdom had inherited the Cossacks along with Ukraine from Lithuania. Lithuania had relied upon the Cossacks to defend its southern borderlands from the Crimean Khanate. Poland found that the Cossacks were a tremendous military asset, not only in defense but in attack. The Polish cavalry was the best in Europe at the time, but it was most effectively used to end battles, and the state had difﬁculty paying for the standing infantry needed to begin them. For a time, the Cossacks ﬁlled this gap. Their value was demonstrated in the wars with Sweden in 1601–2, Muscovy in 1611–12, and the Ottoman empire in 1621. The  Commonwealth attained its greatest glory when its Polish and Lithuanian knights and its Ukrainian Cossacks fought side by side.”

– Unfortunately, the cossacks were not appreciated and the fatal mistake was made.

“The richest Polish and Polonized nobles dominated local politics (in Ukraine), and sought to deny minor gentry (such as Bohdan Khmel’nyts’kyi) their traditional rights. Bohdan Khmel’nyts’kyi (ca. 1595–1657), a registered Cossack, ﬂed to the Cossack headquarters after a Polish ofﬁcial stole his property, took his lover, and murdered his son. Khmel’nyts’ky became Cossack hetman, and began the massive Cossack uprising of 1648. He became the most important ﬁgure in seventeenth-century Ukraine
After Khmel’nyts’ky allied with Muscovy at Pereiaslav in 1654, his Cossacks helped Muscovy make war on the Commonwealth. This brought a series of calamities which killed perhaps a third of the Commonwealth’s population of ten million, and began its fatal decline as a European power.”

– Ukraine-Kiev Rus has always been the soft, but decisive power in the whole European history. It’s always better to treat it with respect and have it on your side.