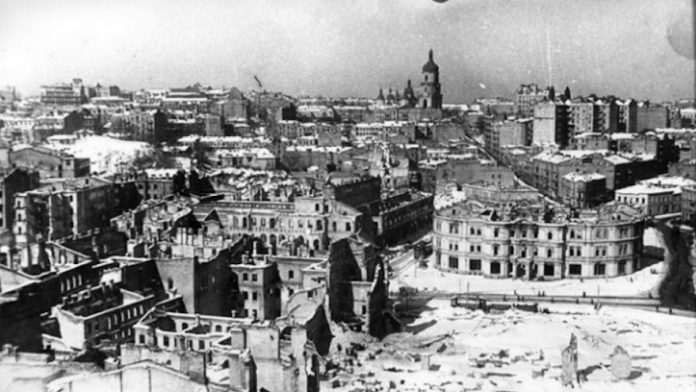 “War is no new thing to Kiev. Starting with the raids of the savages from Tartary, it has been a place of war for thousands of years. But no savage tribe, no invader, ever was responsible for the stupid, calculated cruelties of the Germans.”

“In the afternoon we walked through the beautiful park which edges the cliff above the Dnieper. There were huge trees here, and already the music shells burned by the Germans had been replaced and a new stadium put up. And among the trees were the graves of the defenders of the city, green mounds with red flowers planted on the tops of them. There were little theaters, and many benches to sit on.

Far below, the river winds beside the cliff, and across the river is a sandy beach, where people lie in the sun and swim in the river. Far off there is the flat land with the ruins of the town which was completely destroyed in the fighting for the city, wreckage and blackness, and bits of standing wall. Here is the place where the Red Army came back to the city and relieved it from its German occupation.

There was an orchestra playing in the park, and many children sat on the benches and listened. There were sailboats on the river, and little steamboats, and people were swimming…”

“The rain had stopped, so after the circus we went to a Kiev night club, called the Riviera. It is on the cliff above the river, with an open-air dance floor surrounded by tables, and the whole overlooking the river, which flows away across the plain… At our table we were joined by Alexander Korneichuk, the ranking Ukrainian playwright, a man of great charm and humor. He and Poltarazki began to tell old Ukrainian sayings, and the Ukrainians are famous for them. Almost our favorite is ‘The best bird is the sausage.’ And then Korneichuk told a saying which I had always believed was native to California. It is the description by a heavy eater concerning the nature of the turkey, in which he says, ‘The turkey is a very unsatisfactory bird, it is a little too much for one, and not quite enough for two.’ Apparently the Ukrainians have been saying it for hundreds of years, and I thought it was invented in my home town.

They taught us a toast in Ukrainian which we like: ‘Let us drink to make people at home happy.’

“After luncheon we went to the river, and hired a little motor-boat, and cruised about under the cliff of Kiev and across to the flat sandy beach where hundreds of people were bathing and lying in the sun. Whole families in colored bathing suits were turning brown on the white sand. And there were many little sailboats on the river, tacking back and forth. There were excursion boats too, loaded with people.

We took off our clothes, and jumped over the side of the boat, and swam around in our shorts. The water was warm and pleasant. It was Sunday and very gay. In the gardens on the cliffs, and in the town, people swarmed. Music was playing in the orchestra shells on top of the cliff. And many young couples walked arm in arm along the river…”

“In the evening we went back to the Riviera, the dancing place on the cliff, and we watched the night come down over the huge level Ukraine with the silver river twisting away…”

“In Kiev there is a place called the Cocktail Bar. It is spelled in Russian letters so we couldn’t read it, but that is the way it is pronounced, Cocktail Bar. And it is like an American cocktail bar. There is a round bar with stools, and little tables, and some of the young people of Kiev go there in the evening. They have tall drinks which are called cocktails, and they are wonderful drinks. There is the Kiev cocktail, and the Moscow cocktail, and the Tiflis cocktail, and oddly enough they are always pink in color and they always taste strongly of grenadine.

The Russians, when they make cocktails, seem to believe that the more ingredients, the better the cocktail. There was one that we tasted which had twelve different liquors in it. We forgot what it was called. We didn’t want to remember. We were a little surprised to find cocktail bars in Russia, since the cocktail is a very decadent drink. And surely the Kiev cocktail and the Moscow cocktail are the most decadent of cocktails that we have ever tasted.”

Ukraine – the Motherland of Commercial Beekeeping

DNA test shows that the Swedes came from Ukraine