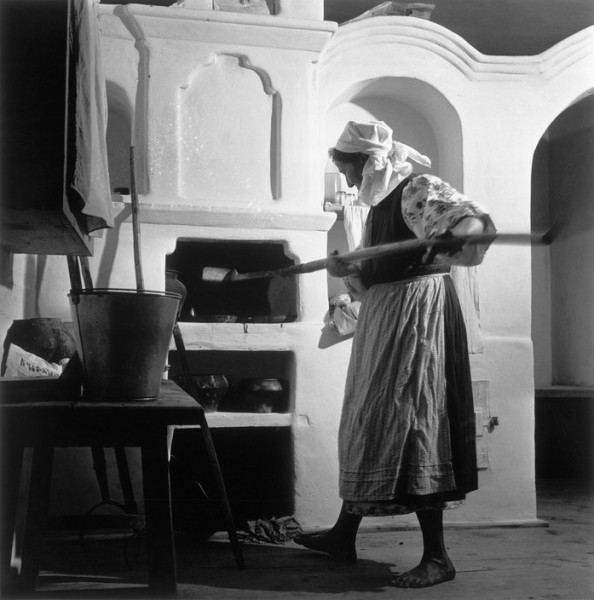 There is a hall, which is a combination storeroom and entrance.From there one goes into the kitchen, a white plaster room, with a brick oven and hearth for the cooking. That fireplace and oven is raised about four feet above the floor, and in this the bread is baked, the flat brown cakes of Ukrainian bread, which are very good.

In the kitchen the women put on a show too. The fire roared in the new white oven, and the flat cakes of good rye bread were baking, and the eggs were frying, and the borscht bubbling. Outside the rain poured down, so we didn’t feel bad, for we were not interfering with their work in harvest time, they couldn’t have been working with the grain anyway…

At last the meal was ready. Ukrainian borscht, which is a meal in itself, and hard fried eggs with bacon, fresh tomatoes and fresh cucumbers and sliced onions, and the hot flat cakes of sweet rye, and honey, and fruit, and sausages, were all put on the table at once. And then the host filled the glasses with pepper vodka, a vodka in which pepper grains have been soaked so that it has an aromatic taste.

Mamuchka, the Cook. ‘Our Eyes Popped’

Mamuchka is a very famous cook in the village, and a very good one. Her meals were unbelievable. Supper that night began with water glasses of vodka, with pickles and home-baked black bread, and Ukrainian shashlik which Mamuchka made very well. There was a great bowl of tomatoes, and onions and cucumbers; there were little fried cakes, full of sour cherries, on which honey was poured, a national dish and delicious. There was fresh milk, and tea, and then more vodka. We ate far too much. We ate the little cherry cakes and honey until our eyes popped.

By the time we had climbed the hill it was two-thirty, and we were ready to go to bed. But this was not Mamuchka’s plan. She must have started cooking the moment we left, after having finished what we thought was supper. The long table was laid, and the food was piled upon it. And at two-thirty in the morning we had the following meal: glasses of vodka, and pickles and cucumbers again, and fried fish which had been caught in the village pond, and little fried cakes and honey again, and a beautiful potato soup.

We were dying of overeating and lack of sleep.

The breakfast must be set down in detail because there has never been anything like it in the world. First came a water glass of vodka, then, for each person, four fried eggs, two huge fried fish, and three glasses of milk; then a dish of pickles, and a glass of homemade cherry wine, and black bread and butter; and then a full cup of honey, and two more glasses of milk, and we finished with another glass of vodka. It sounds incredible that we ate all that for breakfast, but we did, and it was all good, but we felt heavy and a little sick afterward. Mamuchka must have cleared away the breakfast dishes and started immediately to cook again. By four-thirty in the afternoon she had prepared a banquet. This was her little state dinner. She was very proud of her ability, and the village was very proud of her, which is probably one of the reasons she was our hostess. At this dinner the leaders of the village were her guests. There were present at the table the president of the farm, the agricultural expert, called agronome, and his wife, a pretty woman, who was the teacher and dramatic coach, the manager of the farm, the male schoolteacher, the father and mother of course, and us. And if we had thought the other meals were huge, this one outdid them all. There was a great carafe of vodka on the table, and we were very tired of vodka, and our stomachs were very weak. We began with black bread, pickles, tomatoes, and vodka, and then there was Ukrainian borscht with sour cream, and a huge stew of meat, cooked in some way so that the spices had gone into the potatoes themselves. And there were little cakes, and honey, and milk. When a plate became only half empty, Mamuchka filled it up again. She nearly fed us to death.