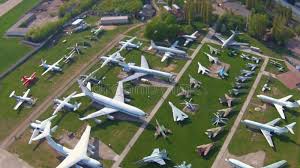 CNN ranked it as # 6 in the WORLD actually.

“This museum houses one of the world’s biggest displays of aviation technology.

The museum is operated by Ukraine’s National Aviation University, which uses the site for training and education.

The majority of the aircraft are ones built by the Soviet Union and exhibits include supersonic bomber planes, transport planes and nuclear missile carriers.

One of the most impressive exhibits is the Tupolev-104.

“The world’s first jet airliner, the Tupolev-104, made its first passenger flight between Moscow and Irkutsk. This plane is now in the State Aviation Museum of Ukraine, and it’s the oldest surviving aircraft of this type.”

Ukraine to send rockets into space from Australia’s Kimberly?