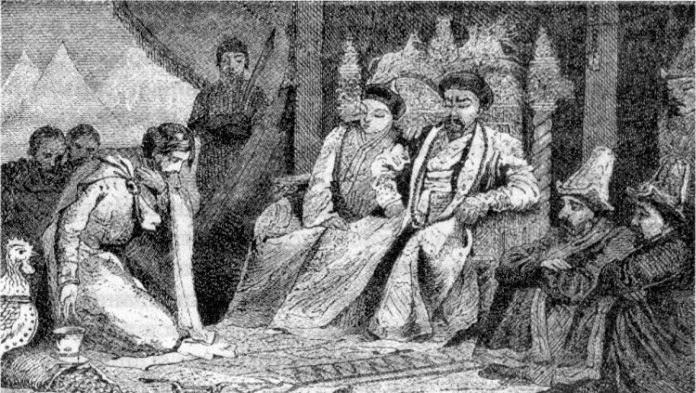 Starting 1240 Moscow became not just a vassal to Golden Horde, but a COLLECTOR of the tribute from the kindred people around itself for the Horde.

There is nothing shameful to become captive or even slaves – sometimes it’s just some superior power behind it, and the examples of Biblical Joseph and Jewish nation in Egypt show that there are ways to keep identity and dignity even in such dire circumstances. There are also examples of Spartacus in ancient Rome and feats of human spirit in prison camps.

It is very important to grasp the meaning of the facts because it explains a lot of what is going on even in the current Russia. It is the same psychology of grasping, taking away of what does not belong to you. It is the same servitude to the superior power or will. It is the same disrespect to the lives of the same kind. Inability and unwillingness to work and create something on your own.

Let’s take a very signiicant figure in Muscovite-Russian history such as Ivan The Terrible for example.

The contemporary Russians start installing monuments to him, so it means there is something they admire about him or/and want back.
The fact is that Ivan the Terrible “was extremely unseccessful in wars against Sweden and Poland.. but he instituted the reign of terror against hereditary nobility..In 1570, for example, Ivan personally led his oprichniki troops against Novgorod, destroying that city and executing several thousand of its inhabitants. Many boyars and other members of the gentry perished during this period, some being publicly executed with calculated and symbolic cruelty.” (Encyclopedia Britannica)
That is how Ivan the Terrible treated his own people. And yes, this is the same Novgorod current Russia is using as an argument in the claim of Kiev Rus’ legacy.
But when one year later (1571) Crimean khan Devlet I Girey approached Moscow with his troops to demand the overdue tribute, Ivan the Terrible was nowhere to be found because he fled Moscow for the fear of his life.

So, Ivan the Terrible turned into Ivan the Terrified! (It is very symbolic of the behavior of the current “ivans”, who are brutal and merciless to other people in their power, but turn into scared ones in the presence of the stronger and more determined force. The nowadays relationships with one small Caucasian republic is a good example)
.Disappointed and angered, Crimean khan burnt Moscow to the ground again.

Another iconic figure in the Muscovy-Russian history is of course Peter the Great. He did want to modernize and bring his country closer to Europe, but his methods in doing so resembled the methods of Ivan the Terrible.
It all can clearly be seen on the new capital he decided to build on the Baltic Sea.

In 1703 Peter captured the Swedish city of Nyen at the mouth of Neva River and almost immediately started building Saint Petersburg.
“The Swiss Italian Domenico Trezzini had elaborated a project, the Frenchman Jean-Baptiste Alexandre Le Blond was the chief architect of Saint Petersburg, but
The city was built by conscripted peasants from all over Russia; a number of Swedish prisoners of war were also involved in some years… Tens of thousands of serfs died building the city.” (Wikipedia)

Tens of thousands! Hundred thousand, more? Who knows, who cared..
Looking at that city, it’s worth keeping in mind that it was planned not by Russians, but built on the piles of Muscovy-Russian bones.

One wonders if there is any other city in the world built on such terrible sacrifices.

Why did he call it Saint Petersburg? “Saint” is not the Russian word, “burg” is not the Russian ending.
Why move the capital right on the border anyway?
Seems like Peter’s mind and heart was fully in Europe and he wanted to create the image of totally another country for the foreigners.
But how to become equal among European kings and queens with the Asian Muscovy’s background?
So with changing the capital, he decided to REBRAND the whole country and appropriate Kiev Rus’ noble history and that is how his order of 1721 appeared – to use name “Russia” instead of Muscovy.

Of course for that the history books were removed all over Ukraine and the whole history was brutally rewritten.

Peter also was not shy in basically copying the Dutch flag and turning it into the current Russia’s “tricolor”, he just moved the blue stripe in the middle.

To hide another awful reality of Muscovy, Peter ordered conversion of the household slaves into house serfs in 1723. (Wikipedia)
But did it change anything?

Farewell, farewell, unwashed Russia,
The land of slaves, the land of lords,
And you, blue uniforms of gendarmes,
And you, obedient to them folks.

Serfdom was abolished only in 1861 (!) with the whole process taking close to another 13 years, to basically return in the form of collective farms 50-60 years later after the Bolshevik Coup.
Think about it, observe the current Russia and you will easily see the same enslaved Muscovy with the same ulus-collector of the Asian type called Moscow.

Above is the picture of a Muscovy ruler Alexander Nevsky who ruled before Ivan the Terrible.
Moscow Orthodox Church made him a Saint as a Defender and so on. Another Idol of that nation.
The true history reveals that he served Batu khan so well, so that the latter made him an adopted son of his.
Many thinkers find his image as the best fitting symbol of the current Muscovy-Russia.