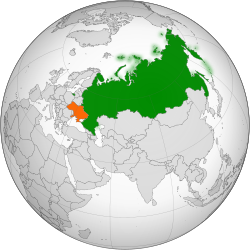 It’s already – by a long stretch – the largest country in the world occupying 11% of the world’s landmass, not much less than DOUBLE that of the second biggest country – Canada – which has 6.1%.

Russia has coastlines in the Arctic Ocean, the Black Sea, the Baltic Sea – not to mention the Bering Sea and the Sea of Okhotsk both of which leading to the Pacific Ocean, or the Barents Sea which gives access to the Atlantic Ocean.

Russia has rich reserves of iron ore, manganese, chromium, nickel, platinum, titanium, copper, tin, lead, tungsten, diamonds, phosphates, and gold. They have oil and natural gas. They have an enormous amount of timber – a fifth of the world’s lumber supply comes from the Siberian forests – and they have the third-largest area of cultivated agricultural land in the world.

What the f… do they need any more territory for?

With the territory they have, and the wealth of natural resources it contains, if they actually had a competent government – instead of the kleptocratic oligarchs that currently run the place – they’d likely be a proper superpower, rather than a Potemkin Village masquerading as one.

Greedy bastard needs to take his riches, f… off, and relax for the rest of his life. (Popular comment on Reddit by 406Highlaner).

We can reiterate that Russia needs Ukrainian lands MOSTLY because it stole the history of Rus-Ukraine. Read more in Ukraine’s Total Recall.

“We have an eywitness to the missile launch” – MH17 Joint Investigation Team to...

Ukraine’s Snake (Zmiiny) Island Is Where Achilles Supposedly Went Mad and Wiped Out the...