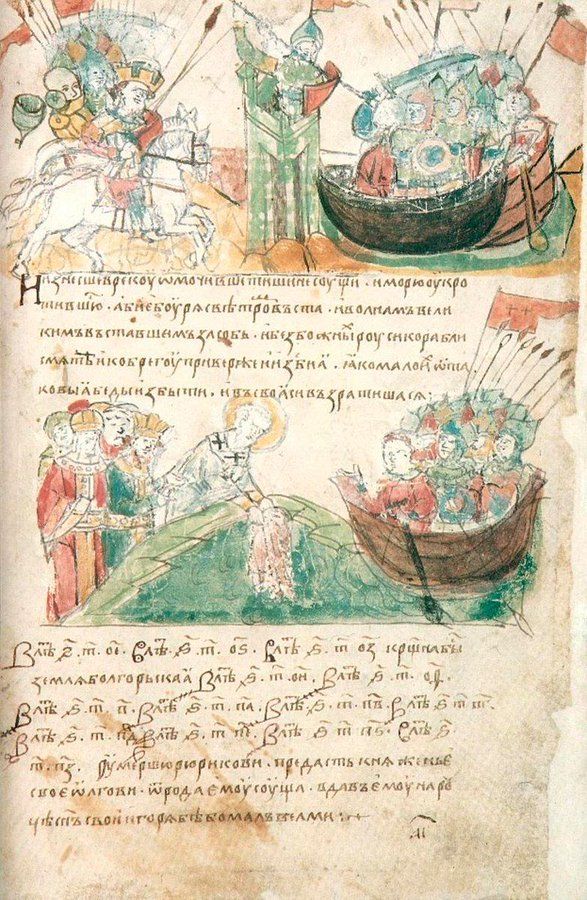 Quotes below are from “The Reconstruction of Nations: Poland, Ukraine, Lithuania, Belarus, 1569-1999” by Timothy Snyder published in 2003 (the publishing year should remove possible accusation of political bias connected with the events of the past 4 years).

“Lithuanian grand dukes were the great warlords of thirteenth- and fourteenth century Europe. They conquered a vast dominion, ranging from native Baltic lands southward through the East Slavic heartland to the Black Sea. Picking up the pieces left by the Mongol invasion of Kyivan Rus’, the pagan Lithuanians incorporated most of the territories of this early East Slavic realm. The Orthodox boyars of Rus’, accustomed to Mongol overlordship, could regard Lithuania not as conqueror but as ally. As Lithuanian military power ﬂowed south, to Kyiv, so the civilization of Rus’—Orthodox religion, Church Slavonic language, and mature legal tradition—ﬂowed north to Vilnius.”

Even after the Mongol invasion, the civilization and Orthodox religion flowed from Kiev to the West!

Church Slavonic language came to Vilnius also from Kiev! As well as Christianity itself.

Having annexed Galicia, a former province of Kyivan Rus’ known in Poland as the “Rus’ Palatinate” (“Województwo Ruskie”), Poland also had its share of Orthodox churchmen and Church Slavonic scribes. Having divided the lands of Kyivan Rus’, Poland and Lithuania shared its cultural inheritances”.

In the same way as Lithuania, Poland also was enriched by Kievan churchmen and orthodox scribes.

Only Poland did so by annexing part of the former Kiev Rus.

“In Muscovy the state language of the Grand Duchy of Lithuania, which we are calling “Chancery Slavonic,” was called “Lithuanian” or Belorussian.” Although modern Russian historians sometimes call this language “Russian,” at the time Muscovite scribes had to translate the Lithuanian statutes into Moscow dialect for them to be of use to their court”.

Muscovy could not understand even “Chancery Slavonic” Belorussia was talking.

Yes, Belorussia was part of Grand Duchy of Lithuania and Moscow had to translate its statutes to get closer to civilization.

It vividly demonstrates how linguistically, culturally different were the realms of Lithuania-Belorussia and backward Moscow in those days.

And the dialect Moscow was using most likely was not even Slavic.

“Since Lithuania for a very long time included a majority of Orthodox subjects and most of the Kyivan patrimony, it was called a “Rusian” realm. In unifying his domains with Poland in 1385, (king) Jogaila acted as “Grand Duke of Lithuania and Lord and Heir of Rus’.” In a 1449 treaty between Poland-Lithuania and Muscovy, the former was called “Rusian,” the latter “Muscovite.” After the fall of Constantinople to the Turks in 1453, Muscovy espoused spiritual and political claims as the seat of Orthodoxy, the heir of Byzantium, and the successor of Kyivan Rus’.”

It’s only after the fall of Constantinople in 1453, Muscovy “espoused claims” to become Rusian!

It will take another 268 years and occupation of Kiev, for them to come up with the name “Russia”.

Moscow Princedom did not care to call itself Muscovy until it saw the chance to REPLACE Constantinople!

And the only way to do it was to steal Kiev Rus legacy!

“These provided the justiﬁcation for Muscovy’s wars with their fellow East Slavs of Lithuania, whose grand dukes had regarded themselves for a century as the successors of Kyivan princes. In practice, Muscovy’s claim to be Rus’ pushed Lithuania toward Poland. When Ivan IV (the Terrible, reigned 1530-1584, proclaimed tsar 1547) began the Livonian Wars in 1558, he hastened the Polish-Lithuanian Union of 1569. At that time, of course, Poland-Lithuania also claimed to be Rus’: Zygmunt August’s titles, as listed in the privilege of 1569, were “King of Poland, Grand Duke of Lithuania, Lord and Heir of Rus’, Prussia, Mazovia, Samogitia, etc.”

Muscovy needed Kiev Rus’ legacy so bad, it started the wars with Lithuania and Poland!

It is the crazy ambition of the backward  Muscovy to become “the Third Rome” that would cause many more wars in the centuries to come!

“Three partitions of Rzeczpospolita (Polish state) Catherine II justified by her claims on “grandfathers’ legacy” flowing allegedly from the Orthodox believers’ subjection of former Kiev metropolis to Moscow,” wrote former Putin’s adviser and his current critic Andrei Illarionov in his article for Echo of Moscow media.

Now please have a closer look at the beginning of war between “Russia” and Ukraine, especially rhetoric of “holy place” during Crimea annexation, and answer the question if it is still the case of trying to appropriate the history.

A detailed 3D tour of St. Sophia Cathedral which was built in the 11th...