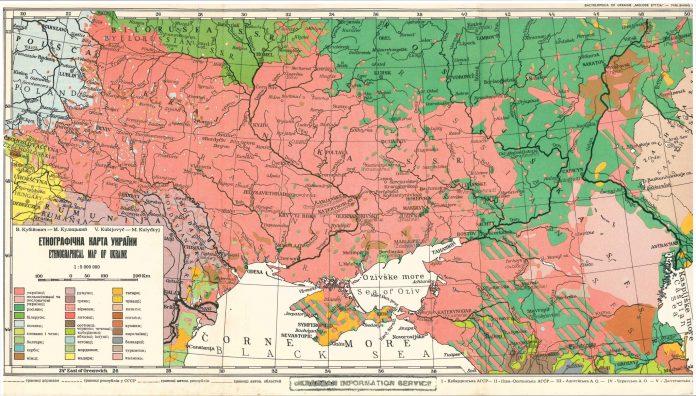 Just last week a Ukrainian historian and politician stated that it has come a time to name the time after the October Revolution when bolsheviks captured Kiev, the time of the occupation of Ukraine by the USSR.

Immediately after that the State Duma in Moscow replied that in that case Ukraine should return to Russia “half of the country” together with the cities like Kharkov and Donetsk because they “were founded by the Russians”.

We will quickly remind those ignorant men that the city of Donetsk (yes, the one where the war’s going on) was founded by a Welsh businessman John Hughes and that the original name of that settlement was Hughzovka.

But the mention of “half of the country” will examine more scrupulously, because it is the same territory Putin claimed in the beginning of his aggression against Ukraine in 2014.

Let’s turn to “The Reconstruction of the nations” again published in 2003, meaning that it was not influenced by the current war between Ukraine and Russia.

“Eight years after Hadiach (Union), Ukraine was split along the Dnipro River between the Commonwealth and Muscovy by the Treaty of Andrusovo (1667).“

Treaty of Andrusovo was a peace treaty between Poland and Muscovy, signed 13 January 1667 in the village of Andrusovo near Smolensk, Muscovy, that remained in effect for thirteen and a half years. It terminated the war that began in 1654. According to this treaty, Left-Bank Ukraine remained under Muscovite rule, while Right-Bank Ukraine was transferred to Poland.

So, exactly 350 years ago Muscovy (why and when Muscovy changed its real name into “Russia” can be learnt in one of the previous articles) signed a treaty with Poland and now expects Ukraine to keep it?

Anyway, what about “the Russia founded” city of Kharkov? In which state, condition was it? Was it at least a settlement where “the empire” brought civilization to?

“Chernihiv and Kharkiv collegia provided classical education along Baroque lines, mainly in Latin and Polish, to tens of thousands of East Slavic students.. These academies, founded to defend Orthodoxy against Catholicism, were in close contact with Protestant Europe. For the next hundred and ﬁfty years, these Ukrainian schools provided Moscow and St. Petersburg with doctors, journalists, and civil servants. ..In these ways, the incorporation of Kyiv and left-bank Ukraine forced Muscovy into contact with Europe.“

So, after all, as it turns out, Kharkov had already been a very much advanced and intellectual city at the time Muscovy incorporated it. It had one of the best collegias in Eastern Europe at the time, had it not?

What is more telling, is that it was just the “Left-Bank Ukraine” that forced (!) eastward and backward Muscovy into contact with Europe!

It was Muscovy who suddenly received brains and culture with that city in particular it had not had before!

If you want to know what usually happens where “Russia” comes, please have a look at the city of Kaliningrad, the real name of which is Konigsberg (by the way, don’t they want to return it to Germany following their logic?).

But the most telling of the “Russian” nature is how they treated the house of Immanuel Kant which is situated in that city. Here is an article.

“In the 1670s professors of the Kyiv Academy were ideologists of the new regime. In these ways, the absorption of eastern Ukraine put into practice a transition from a limited geographic and political notion of Russia as the territory of Muscovy to an imperial idea of Russia as Great Russia (Muscovy), Little Russia (Ukraine), and White Russia (Belarus).“

There was a lot of Kiev Orthodox churchmen’s desire for power in that creativity, but the truth remains that at the time of the inception of “Little Russia” idea in 1670s it was only The Left-Bank Ukraine that was meant under that term. It became even strongly articulated with the loss of the Swedish troops supported by Ukrainian hetman Ivan Mazepa mentioned in the previous article in the battle under the Ukrainian city of Poltava some 40 years later. (Kiev pope pronounced it in his congratulatory sermon to Peter I in the Kiev St. Sophia Cathedral on 24 July 1709).

150 years was enough for Ukrainian spirit in Ukrainian city on Ukrainian land to regain its strength again! And what is important – that revival started in the city of Kharkov.

So Ukrainian historians and politicians should be talking about occupation of Ukraine by Moscow not for just 100 years, but at least part of it for 350 years.

P.S. A lot of people compare the strife of Ukraine for independence from Muscovy with the strife of Scotland from England so masterfully portrayed in the Mel Gibson’s “Braveheart” movie.

There are truly some similarities, but the main difference is this: it is civilization now (Ukraine) defending itself from savages.