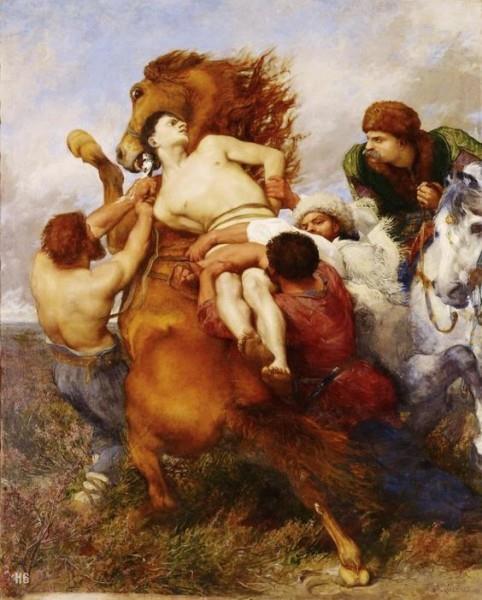 Mazeppa is a narrative poem written by the English romantic poet Lord Byron in 1819. It is based on a popular legend about the early life of Ivan Mazepa (1639–1709), a Ukrainian gentleman who later became Hetman of the Ukrainian Cossacks.

According to the poem, the young Mazeppa has a love affair with a Countess Theresa while serving as a page at the Court of King John II Casimir Vasa.

Countess Theresa was married to a much older Count. On discovering the affair, the Count punishes Mazeppa by tying him naked to a wild horse and setting the horse loose. The bulk of the poem describes the traumatic journey of the hero strapped to the horse. The poem has been praised for its “vigor of style and its sharp realization of the feelings of suffering and endurance”. (Wiki)

‘Twas after dread Pultowa’s day,
When fortune left the royal Swede–
Around a slaughtered army lay,
No more to combat and to bleed.
The power and glory of the war,
Faithless as their vain votaries, men,
Had passed to the triumphant Czar,
And Moscow’s walls were safe again–
Until a day more dark and drear,
And a more memorable year,
Should give to slaughter and to shame
A mightier host and haughtier name;
A greater wreck, a deeper fall,
A shock to one–a thunderbolt to all.

“The theatrical Mazeppa thrived: its first season in 1831 was an immediate success and the play ran for several hundred performances at Astley’s Royal Amphitheatre in London.

It was revived for many years subsequently in both England and America, including a famous production that starred the celebrated Adah Isaacs Menken, who played the role of Mazeppa for American audiences in 1861 and for English audiences two years later to great acclaim.” (Barnes 2016)

*Adah Isaacs Menken – the highest earning actress of her time, best known for her performance in the melodrama Mazeppa, with a climax that featured her apparently nude and riding a horse on stage (Wiki)