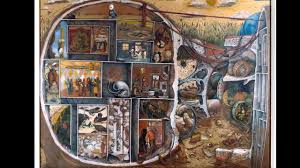 Future “Christian mystic, bestselling author and illustrator”, William Kurelek was the eldest of the seven children of Ukrainian emmigrant family in northern Alberta and Manitoba.

But it’s The Maze, the gouache on paper self-portrait that stands out of all Kurelek’s works.

Compartmenalized scenes of horror “reminiscent of Hieronymous Bosch” as some specialists think represent William’s experience growing up on those farms.

Part of that hard experience happened because his family did not speak English well at first – “Kurelek’s sense of alienation increased when he was sent to school knowing only a little English. His chattering in Ukrainian was met with laughter and derision” (“passion of william kurelek“)

“In the summer of 1977 he began to feel ill but was determined to make a significant journey. He had waited for Soviet government to give him permission to visit his father’s village in Ukraine, the anscestral root and the source of his pain. During this pilgrimage he hoped to gain insights into his father and into himself. He left in early September and returned to Canada seriously ill”.

As can be seen from Kurelek’s feelings, it was Russia who did so much evil to Ukraine, that it affected even descendants of the Ukrainians who had to flee their homes.

It’s worth mentioning that exactly in the times when William Kurelek’s father struggled to survive during the years of Great Depression in Canada, millions of Ukrainians were dying because of the hand-made famine (Holodomor) when Soviet-Russians simply took away all the food they had.

So, no matter how hard his life was, he seemed to have appreciated the fact that he could live, paint and leave the legacy so many generations admire now.

As it seems, there is truly something Christ-like, when a person continues to create no matter what hardships he or she has to face in life.