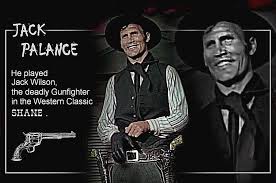 Jack Palance born Volodymyr Palahniuk; February 18, 1919 – November 10, 2006) was an American actor of Ukrainian descent. He was nominated for three Academy Awards, all for Best Actor in a Supporting Role, receiving nominations for his roles in Sudden Fear (1952) and Shane (1953), and winning the Oscar almost 40 years later for his role in City Slickers (1991). (Wikipedia)

It is during 1992 Oscar awarding ceremony Jack Palance, being 73 years old, performed push-up on one arm (video)

In Shane movie, he says the line which many Americans of elder generation quoted – “And where do you think you’re going?“.

It is the phrase and a method Ukraine should use to stop anyone who comes on its territory uninvated to get some vodka.