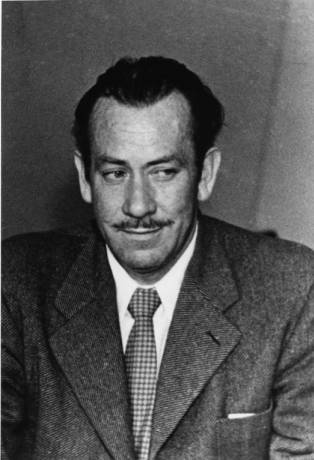 Excerpts are from “A Russian Journal” written by John Steinbeck after his trip with a famous war photographer Robert Capa to the Soviet Union in the summer of 1947.

Part 1. Steinbeck and Capa in Kiev

“We tried to read a little of the plane, and promptly went to sleep. And when we were awakened, we were over the flat grainlands of the Ukraine, as flat as our Middle West, and almost as fruitful. The huge bread basket of Europe, the coveted land for centuries, the endless fields lay below us, yellow and with wheat and rye, some of it already harvested, and some of it being harvested. There was no hill, no eminence of any kind. The flat stretched away to a round unbroken horizon. And streams and rivers snaked and twisted across the plain.”

Near the villages there were the zigzags of trenches, and the scoops of shell holes where the fighting had taken place. There were roofless houses, and the black patches of burned buildings.

We seemed to fly endlessly over this flat plain. But at last we came to the Dnieper, and saw Kiev, on its cliff above the river, the only eminence for many miles around. We flew over the broken city and landed on the outskirts…”

“It must at one time have been a beautiful city. It is much older than Moscow. It is the mother of Russian cities. Seated on its hill beside the Dnieper, it spreads down into the plain. Its monasteries and fortresses and churches date from the eleventh century. It was once a favorite resort of the czars, and they had their vacation palaces here. Its public buildings were known all over Russia. It was a center of religion. And now it is a semi-ruin. Here the Germans showed what they could do. Every public building, every library, every theater, even the permanent circus, destroyed, not with gunfire, not through fighting, but with fire and dynamite. Its university is burned and tumbled, its schools in ruins. This was not fighting, this was the crazy destruction of every cultural facility the city had, and nearly every beautiful building that had been put up during a thousand years. Here German culture did its work. And one of the few justices in the world is that German prisoners are helping to clean up the mess they made…”

“Although Kiev is greatly destroyed while Moscow is not, the people in Kiev did not seem to have the dead weariness of the Moscow people. They did not slouch when they walked, their shoulders were back, and they laughed in the streets…”

“Much of the destruction that has been brought on this people is because their land is rich and productive and many conquerors have coveted it. If the United States were completely destroyed from New York to Kansas, we would have about the area of destruction the Ukraine has. If six million people were killed, not counting soldiers, fifteen per cent of the population, you would have an idea of the casualties of the Ukraine. Counting soldiers, there would be many more, but six million out of forty-five million civilians have been killed. There are mines which will never be opened because the Germans threw thousands of bodies down into the shafts. Every piece of machinery in the Ukraine has been destroyed or removed, so that now, until more can be made, everything must be done by hand. Every stone and brick of the ruined city must be lifted and carried with the hands, for there are no bulldozers. And while they are rebuilding, the Ukrainians must produce food, for theirs is the great granary of the nation…”

“The work ahead of them is overwhelming. The buildings to be replaced must be torn down first. An amount of labor that the bulldozer could do in a few days takes weeks by hand, but they have no bulldozers yet. Everything must be replaced. And it must be done quickly.

We went through the blasted and destroyed center of the city, past the corner where the German sadists were hanged after the war.”

Gravitational trajectory adopted by Apollo-11 program to reach the Moon is named after a...