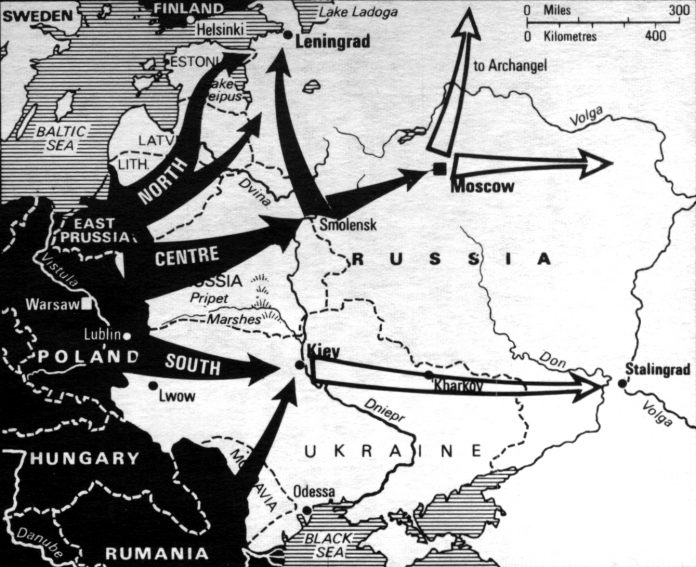 In the previous article on this site about the Largest Tank Battle of WW2 which took place near a Ukrainian city of Brody, we quoted an American military historian David Glantz: “What’s all the more remarkable is that the Soviet corps had considerable numbers of heavier KV and T-34 tanks, tougher than the German army’s best tanks at the time. The Soviet 10th Tank Division of the 15th Mechanized Corps alone had 63 KVs and 38 T-34s.” We also asked a couple of obvious questions of where these tanks had come from and what they were doing near Ukraine’s western border. In this article, we will try to find the answer.

Modern Russian as well and former Soviet propaganda have been trying to imply that the USSR began to form its armies only after World War Two began. But it is a lie.

The Soviet Union began to form armies in the European part of its territories in 1939 – the 3rd and 4th Armies appeared in Belarus, the 5th and 6th in Ukraine, and the 7th, 8th and 9th near Finland.

It is worth mentioning that in March of that year there was a speech by Stalin at the 18th Party Congress in which Stalin called the USA, Britain, and France the “aggressor states”. It is after that very Congress that Vyacheslav Molotov was appointed and understanding with Nazi Germany was pursued resulting in the Molotov-Ribbentrop Pact.

From Winter War to Southern Ukraine

We will have a look at the destiny of the 9th Army which appeared at the borders of Finland in 1939.

In the Winter War against Finland, the 9th Army was simply a rifle corps consisting of three rifle divisions.

After the Finnish war, the 9th turned up on the Romanian frontier in southern Ukraine, where, following the Finnish pattern, it helped “liberate” the workers of Bessarabia and Bukovina at the very same time other Soviet Armies were “liberating” Estonia, Lithuania, Latvia.

“Liberation” of Bessarabia was nothing like the war with Finland – the Soviet Union pressured Romania, under threat of war into withdrawing from the region. The major part of the annexed area was attached to present-day Moldova.

After the “liberation” campaign, the 9th Army, although officially disbanded, stayed in the area – its headquarters and the headquarters of the Odessa Military District merged into one entity.

The term “invasion army” was used by the Soviet experts until 1935 approximately; after that, the terms “shock army” and “cover army” were used to conceal the real purpose.

It was the strike power that made a shock army different from an ordinary army. In this case, it was a mechanized corps consisting of 1, 031 tanks which was comparable to the strike power of any German tank group. According to Viktor Suvorov, the author of Icebreaker, “on 21 June 1941, all the Soviet armies on the German and Romanian borders, as well as the 23rd Army on the Finnish frontier, were of shock army standard. They were, from north to south, the 23rd, 8th, 11th, 3rd, 10th, 4th, 5th, 6th, 26th, 12th, 18th, and 9th. The 16th Army was then added to them.”

Three Out of the Ordinary Armies

Of the thirteen armies mentioned, three of them were different– the 6th and the 9th armies in Ukraine, and the 10th in Belarus.

These three armies were to have 2,350 tanks, 698 armored vehicles, over 4,000 guns and mortars and more than 250,000 soldiers and officers each. Also, they were to receive up to twelve heavy artillery regiments. With so many tanks, each one of them was roughly equal to one-half of the entire German Wehrmacht.

Viktor Suvorov: “If we call the German tank groups, each with between 600 and 1,000 tanks, engines of aggression, what then are we to call the 6th, 9th, and 10th Soviet Armies?”

But even of the three heavy shock armies, the 9th one still stands out.

“On 21 June 1941, the 9th Army had 17 divisions in all, including two air, four tank, two motorized, two cavalry and seven rifle. At full strength, the seven corps of the 9th Army had 3,341 tanks. This was roughly the same number as the Wehrmacht had; in quality, they were superior. According to Colonel-General P. Belov (at that time he was a major-general, commander of the 2nd Cavalry Corps of the 9th Army), it was intended to give T-34 tanks even to the cavalry of this army” (Icebreaker).

The 9th Army was also unique in having a colonel-general as its commander. Thirty other Soviet armies had major-generals and lieutenant-generals as their commanders.

So, what did the most powerful army of the world doing on the border with Romania? What was its purpose?

Romania was Germany’s basic source of oil. A strike at Ploiesti Oil Refineries, which were less than 200 kilometers away, would ground all Germany’s industry and whole German military machine to a halt.

“Hitler allowed none of this to happen. A German government statement handed over to the Soviet government on the outbreak of war in the East gives the reasons for Germany’s action. One of these reasons was that Soviet troops were being concentrated unjustifiably on the frontier with Romania and that this represented a mortal danger for Germany.”

Two years later, on August 1, 1943, the American planes attacked the Romanian refineries from bases in Italy and Libya, North Africa. The mission under the codename “Tidal Wave” turned out very costly – out of the huge fleet of 178 B-24 bombers, only 88 returned to the bases.