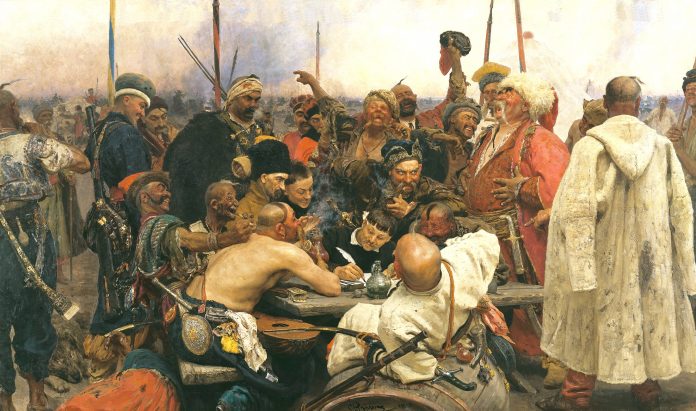 It’s Harvard Professor Serhii Plokhy this time with the book “The Gates of Europe: The History of Ukraine”

“In 1492, the year Christopher Columbus landed on the Caribbean island he named San Salvador and King Ferdinand and Queen Isabella signed a decree expelling the Jews from Spain, the Cossacks made their first appearance in the international arena. According to a complaint sent that year to Grand Duke Alexander of Lithuania by the Crimean khan, subjects of the duke from the cities of Kyiv and Cherkasy had captured and pillaged a Tatar ship in what seems to have been the lower reaches of the Dnieper. The duke never questioned that these might be his people or that they might have engaged in steppe-style highway robbery. He ordered his borderland (the term he used was “Ukrainian”) officials to investigate the Cossacks who might have been involved in the raid. He also ordered that the perpetrators be executed and that their belongings, which apparently had to include the stolen merchandise, be given to a representative of the khan.

If Alexander’s orders were carried out, they had no lasting effect. In the following year, the Crimean khan accused Cossacks from Cherkasy of attacking a Muscovite ambassador. In 1499, Cossacks were spotted at the Dnieper estuary ravaging the environs of the Tatar fortress at Ochakiv…

To stop Cossack expeditions going down the Dnieper to the Black Sea, the khan considered blocking the Dnieper near Ochakiv with chains”

– Thanks to the previous articles, the reader knows that at that time Ukraine was part of the Polish-Lithuanian Commonwealth, so it’s no surprise that Crimean khan sent complaint to Lithuania.

It’s much more interesting to note that Cossacks attacked Muscovite ambassador – what for? May it just have been that he was carrying Moscow’s yearly tribute to Crimea?

Another interesting thing to note is that Crimean khan started fearing them so much, that thought of blocking huge river with chains.

“While the original Cossacks were town dwellers along the Prypiat and Dnieper rivers, by the end of the sixteenth century local peasants had swelled their ranks.“

– Yes, the Prypiat is the river associated with the city emptied by Chornobyl disaster.

“The registered Cossacks were recruited from the landowning Cossack class, whose members resided in towns and settlements between Kyiv and Cherkasy. They had a chance to obtain special rights associated with royal service. But there was also another group, the Zaporozhian Cossacks, many of them former peasants, who had a fortified settlement called the Sich (after the wooden palisade that protected it) on the islands beyond the rapids. They were beyond the reach of royal officials, caused most of the trouble with the Crimean Tatars, and, in turbulent times, served as a magnet for the dissatisfied townsmen and peasants who fled to the steppes.“

– The word “Sich” is now part of the brand name of the one of the best helicopter engines producer in the world – Motor Sich.

“In 1606, descending the Dnieper and entering the Black Sea on their longboats, called “seagulls” (chaiky), the Cossacks stormed Varna, one of the strongest Ottoman fortresses on the western Black Sea shore. In 1614 they pillaged Trabzon on the southwestern shore, and in the following year they entered the Istanbul harbor of the Golden Horn and pillaged the suburbs, much as the Vikings had done some 750 years earlier.. In 1616, they attacked Kaffa, the main slave-trading center on the Crimean coast, and liberated all the captives.“

– Kaffa, situated in Crimea where current Feodosia is, was one of the largest slave markets in the world. At some days there were up to 30 000 slaves, so one can only imagine how many military guards there were. But the Cossacks risked their lives to liberate the slaves!

As for the Cossacks travelling the Viking routs, it’s very possible that there were many Viking heirs among Cossacks who learnt the details of the Viking raids from their ancestors. The readers of earlier articles on this site know well that the Vikings went to Constantinople via and from Kiev which was their stronghold for centuries. And that the Kiev King Sviatoslav, the great warrior, was in fact Sveinald and was killed right where the Cossacks’ Sich appeared. There are simply striking similarities between the way Sveinald-Sviatoslav looked, dressed and the Cossacks looks. And their boats resembled in many ways those of the Vikings.

“The French ambassador in Istanbul, Count Philippe de Harlay of Cйsy, wrote to King Louis XIII in July 1620, “Every time the Cossacks are near here on the Black Sea, they seize incredible booty despite their weak forces and have such a reputation that strokes of the cudgel are required to force the Turkish soldiers to do battle against them on several galleys that the grand seigneur [the sultan] sends there with great difficulty.”

Quite a daredevil fighters the Cossacks must have been to scare even Turkish soldiers so bad!

“In 1618, a Ukrainian Cossack army of 20,000 joined Polish troops in their march on Moscow and took part in the siege of the capital. The Cossacks helped end the war on conditions favorable to the Kingdom of Poland. One of them was the transfer to Poland of the Chernihiv land, which the Grand Duchy of Lithuania had lost in the early sixteenth century. By the mid-seventeenth century, Chernihiv would become an important part of the Cossack world.”

So in 1618 the Cossacks together with Polish troops made Muscovy capitulate.

Even in this perspective it’s not possible to imagine the Cossacks would want to make themselves, their love for freedom to become part of the Muscovy only 36 years later!