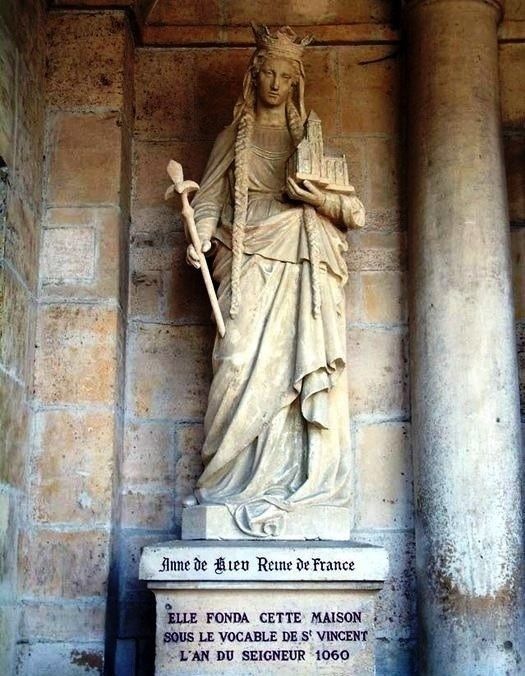 Every nation honors their mothers, sisters, daughters. Ukraine does too. Ukraine has all the reason to be proud of its women and here are several reasons why:

Anne of Kiev – Queen of France, daughter of Yaroslav the Great who married French King who, unlike his wife could not even read. Anna wrote to her father that she found her new land “a barbarous country where the houses are gloomy, the churches ugly, and the customs revolting.”

Meaning that Paris of her days could not compare to Kyiv!

Anna will change the situation and put France on the way which will gradually lead it to what it is now.

Anna will be the first Queen of France to serve as regent when her husband died and her son Philip needed some 7 more years to come of age.

In many senses Anna become the Mother of the French nation  (Kings’ dynasty for sure) and many monuments show that people still remember her.

Roxolana – her story remotely resembles the story of the Biblical Joseph because she also was brought into the country (Turkey) as a slave, but became one of the most powerful and influential women in Ottoman history. In some sense, she become the Mother of Ottoman Empire.

Anna Akhmatova (Gorenko) – a famous Kyiv poet, one of the most acclaimed writers of the former Soviet Union.

Lyudmila Pavlichenko – the best lady sniper of WW2 or possibly in the whole history. Personal friend of the Eleanor Roosevelt, First USA Lady. There is a powerful movie devoted to the story.

Natalie Wood is Natalia Nickolaevna Zakharenko came to the USA with her parents from Kharkiv.

Nina Arianda – “Goliath” movie actress and not only

Victoria Motrichko – one of the best Draughts players in the World

Ukrainian Biathlon Women Team – true heirs of Lyudmila Pavlichenko. Video of one of the most memorable Relay competition this winter with last 20 minutes being a true thriller.

Three Legendary Heroes Who May Or May Not Have Existed